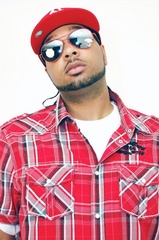 BIO: Having grown up in Baltimore, Hunit Stackz has been penning rhymes since the age of thirteen and recording music since he was fourteen. Now, at the age of twenty-five, he is an incredible songwriter & rap artist. Hunit Stackz comes from a line of notable hip-hop achievers under Block Boy Music inc. Stackz’ familiarity with Baltimore—particularly Park Heights, Cherry Hill, and Claremont Projects—plays into his music. He strives to make music that will hit home with his listeners and touch them on a personal level. Hunit Stackz is an artist on popular Independent Label "Block Boy Music" , a Label which also bred 106 & Park Hall Of Famer "Backland" and Billbord Top 10 Singles artist "BOMB", so it should come as no shock to hear such an enormus talent in this new artist.

Hunit Stackz "Dummies" #1 song of the month by HotNewHipHop.com
Hunit Stackz "Dummies" rated #1 song of the month on HotNewHipHop.com
Artist Spotlight: Hunit Stackz by Singleton Newman
Artist Spotlight: Hunit Stackz (@hunitstackz) Hunit Stackz is a Baltimore MC who is a solo artist and affiliate of Block Boy Music Group which includes 106&Park Freestyle Friday Champ Backland...
Check Out: Hunit Stackz by BmoreShit.com
http://bmoreshit.com/blog/hood-shit/hunit-stackz-red-bitch-yellow-bitch/
Stackz - No 2Morrow by Al Shipley
Stackz sent me this mixtape a few months ago, he's a rapper who crews with B.O.M.B. and Backland, who appears on here. I kinda slept on it for a while and hadn't gotten around to posting about it,...
3 Hunit Stackz Reviews by BmoresVeryOwn
Hunit Stackz and his Block Boy crew Backland and D. davis have been getting a lot of play on 92Q lately with this joint. Definitely keep requesting it. It was featured on an ARS Street Radio 8...
p
A
n
E
F
Song Title by Artist Name
987654d
LM
iAnEAqqqq