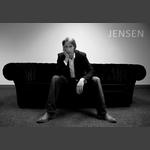 Singer songwriter from Leeds, Yorkshire UK.
Was frontman for a few years in a r&b/soul covers band until he got the writing bug and went solo for a while.
Now he has a full backing band and performs and records his own material.
Jensen has recently been recording in Norway with the Stargate/Dsign crew, and in Los Angeles with Marshall Altman at Galtline studios.
His music is an eclectic mix and crossover of AC/Soft Rock and something that can only be described as grown up pop. Jensen quotes "I've been writing songs from an early age but apart from the usual teenage angst there wasnt really a lot to tell" and now with a few more years under my belt, I find theres more stuff to write about " the more you get screwed over in life, the more there is to say about it.<p /> <p />The emotional impact of a soulful and honest vocal delivery is the first thing that hits when you hear Jensen for the first time. You think you know the song and the voice even though you never heard it before . . . because Jensen has that special quality that captivates an audience right from the first line. There’s no stylistic inflections, no vocal gymnastics just honest to goodness natural vocal talent that showcases his songs to perfection. His songs are stories about life, some about love, and most about situations that we can relate to through our own experiences good and bad. <p />Jensens debut album is due to be released in spring 2008, the songs are real down to earth & honest , with real players, organic music, and a lotta luv