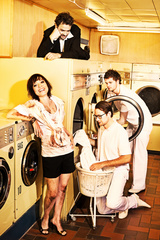 Debut album ‘Lonely in a modern way’ – released in September 2008

2nd full album ‘There is only becoming’ is on the way

UK review by Whisperin & Hollerin
'Kind Of Girl''Lonely In A Modern Way' - Label: 'trak2r'- Genre: 'Pop' - Release Date: 'June 2008'Our Rating: 9 out of 10 starsWe only recently reviewed a copy of this band's stunning single Slave...
Live review UK by Artrocker
KIND OF GIRL are fronted by a small girl that looks like Velma from Scooby Doo - that's right, the brown haired one that wears glasses. Her name is Sissel, and her Copenhagen based group will make...