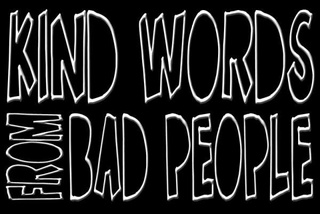 KWFBP Feature by Skope Magazine -Janie Franz
Sitting down over here now are the folks from Kind Words From Bad People, an electronic/dance/DJ group from Vancouver, BC. This four-person band uses female singing voices, male spoken rhymes,...
Rhythm Unconscious Review by Junior's Cave Online Magazine
Get ready to be blown away by a sound that is unique to most others. With a mixture of several genres, Kind Words From Bad People will simply amaze you with what they are offering to the music...
Rhythm Unconscious Review by Target Audience Magazine
When listening to "Kinds Words From Bad People" listeners can sit back and let an andante trance permeate to the tip of their soul. vocals differ like east and west. The east is the rapping which...
Rhythm Unconscious Review by Alt Magazine
Rhythm Unconscious, a downtempo lounge-like intrepid journey into downtempo rap/avant garde fusion is one hell of a cimenmatic audioscape, and an introspective journey into our modern times. Pick...
Kind Words From Bad People Feature by TwoGroove Online Magazine
Distorted southern guitar, electronic elements, Flobots-esque spoken word, hip-hop and an unnatural love for deep sea invertebrates. Combine all of these things and you get…well, a mess really....
p
A
n
E
F
Song Title by Artist Name
987654d
LM
iAnEAqqqq