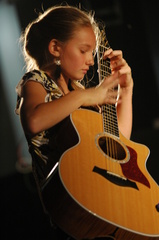 MARNÉE ~ Singer / Songwriter / Guitarist August 14, 2008 The Grand Opening of Lucas Oil Stadium, the Indianapolis Colt’s new home. Music legends John Mellencamp and Stephen Stills had finished their sets and Stephen announces Marnée to the stage to perform while the roof opens for the first time. The torch passes as Marnée stuns the crowd with her amazing fret work and vocal performance. The audience gives her a standing ovation. MARNÉE WAS 11 YEARS OLD! Earlier that year Marnée was recognized in CMJ magazine for her songwriting, vocals and performance skills, writing; “Singer/songwriter Marnee sings very mature lyrics belying her 11 years of age with sweet whispering, yet full and rich vocals. Blending minimalist guitar and a spine tingling voice, “Down In The Valley” is entrancing and unique”. Marnée's incredible guitar skills have earned her a sponsorship by Taylor Guitars. Marnée’s musical performances have been featured on T.V. and radio, as well as many other media outlets. Her music is and has always been #1 in her life. This is what she insists on and it shows. With numerous hours on the stage, Marnée’s love for her craft shines through with an energizing, euphoric vibe that shakes her audience. Marnée is simply doing something she loves. Marnée is currently in the studio working on her second CD, an incredible follow up to her debut CD ‘WHEN THERE’S GRAVITY’.

10 & RISING FAST~ BIG THINGS AWAIT MARNEE by WHATZUP/Michelle DeVinney
Fort Wayne has proven to be a hotbed of musical talent, as the pages of whatzup prove each week. Each week dozens of talented local musicians play the clubs, bars and coffeehouses around town,...
Local 10-year-old's star on fast track by Journal Gazette
Marnée by Trinity Lost/DAMN GOOD TUNES
Feburary 2010 __________________________________________________ What I remember most as a child, was the endless acoustic waves echoing throughout the walls of our home. Every door was undoubtedly...
CD RELEASE by Chris Hupe/WHATZUP
When There’s Gravity-Marnée ~ May 21, 2009 ____________________________________________________ Marnée is 12 years old. Okay, that’s not completely relevant. A lot of fuss has been made over her...
CMJ by CMJ
OurStage Pick: Marnee ~ 2008 “Down In The Valley” Solo Performance Channel Singer/songwriter Marnee sings very mature lyrics belying her 11 years of age with sweet whispering, yet full and rich...
An Ear For Sound & Singing & The Talent To Become Marnée by Fort Wayne Magazine~Michelle DeVinney 2009
Turning 13 can be difficult for many. But for singer/songwriter Marnée, who already has her career established and is looking ahead to making her name known beyond her native Fort Wayne, becoming a...
Out and About Columb by Whatzup Magazine / Nick Braun 2009
This past summer, I missed an opportunity that I could kick myself in the rear over. On my way to an evening Tin Caps game, I strolled through the Rock the Plaza crowd in front of the library as...
p
A
n
E
F
Song Title by Artist Name
987654d
LM
iAnEAqqqq