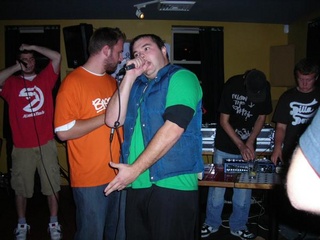 Mass Production is a five-man hip-hop collective based in Massachusetts. On the production side, Mass Production has supplied beats to many artists in the growing New England hip-hop scene, including the Problemaddicts, Fame, The Prototype, Rockmode, and others. Infuenced by hip-hop pioneers as well as those of soul, funk, jazz, and rock, MP has developed a distinct sample-based sound that stands out in a world of synthesized beats. Mass Pro rappers (Phreeze Phrame, Big Loop, Name Brand, Third Touch) hope to bring something new to the table with honest, personal lyrics and impressive lyricism. Through their own label, 30dolush, Mass Production has already released Phreeze Phrame's 'Home Grown' and 'Thickly Settled,' Big Loop's 'Real Recognized,' Name Brand and Phreeze Phrame's 'The Genesis', and the collaborative 'Lush Mixtape 2006' and 'If A Beat Drops in the Woods...' With many more projects in the works and a growing online presence, MP is hoping to put their locale and thier unique brand of hip-hop on the map.