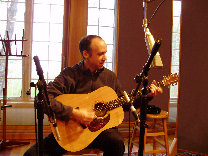 Review of Max Goldston's newest release "Emancipation" followed by interview at www.mwe3.com by Robert Silverstein
EMANCIPATION CD REVIEW--
With a career that followed being born in the Mediterranean island of Ibiza and then starting one of the first critically acclaimed rock bands in Ibiza in the ‘80s, guitarist Max Goldston returned to the U.S. and has since lead a intriguing musical career as an acoustic guitar instrumentalist. Following a collection of guitar instrumentals recorded between 1996 and 2005 entitled Western Age and a 2006 collaboration with Barcelona-based producer Antoni Colomar, Goldston began working in the Vermont studio of Windham Hill Records founder WILL ACKERMAN. The results can be heard on Emancipation, Goldston’s 2009 CD release. For anyone who doesn’t know or remember, Will Ackerman’s tenure as the head of WINDHAM HILL yielded some of the most meditative and atmospheric instrumental music of the mid ‘80s and early ‘90s and he’s also the man who helped craft the term New Age. Recording up at Ackerman’s IMAGINARY ROAD STUDIOS, Goldston makes the most of the studio’s high tech sound and comes out a winner with Emancipation. Few guitarists today are as adept and proficient as Goldston when it comes to capturing the Windham Hill guitar sound that Ackerman helped introduce with his signings back then, including the late great Michael Hedges, Alex DeGrassi and Ackerman himself. An essential spin for fans of the acoustic guitar, Emancipation is a breezy acoustic guitar masterpiece and will appeal to fans of the Windham Hill sound and beyond. Further assisted by top sound engineer Corin Nelsen, Goldston makes his Martin guitar ring out loud and clear on a solid CD that simultaneously traces the legacy of the acoustic instrumental guitar sound while bringing it forward into the future. One other point to mention is the eye-catching artwork adorning the CD cover of of Emancipation, to which Goldston comments, ‘The cover design is a painting called “La Chica con Guitarra”. The painter is TOM PROVO, an artist I met over in Ibiza years ago. He now resides in Blacksburg Virginia and his many paintings are in some of the top art galleries of the country. The design for the CD was done by graphic art designer Angeles Diaz in Barcelona and the CD was manufactured by Discmakers.’ www.MaxGoldston.com
Robert Silverstein

In 2007 I sent a myspace friend invite to Will Ackerman. A few days later when I checked my mail I had a reply from Will saying ‘I heard your stuff and enjoyed it very much. The doors to my studio are open to you any time.’ During my meeting with Will, the CD was set to be recorded late April at Imaginary Road Studios in Windham County Vermont. It was engineered, mixed, and mastered by 2004 Grammy award winning Corin Nelsen. It was recorded using Pro Tools HD at 24 bit/ 96 kHz via Apogee converters. The mics were Klaus Heyne customized Neumann KM 256s and U67s (4 mics) through Imaginary Roads’ custom Hemingway mic preamps. I drove up to Vermont from Atlanta. The solitude of a long trip and the isolation of the studio way up in the mountains of Vermont were key to the whole experience. My first day at the studio Corin put me at ease after my first hour of testing mikes and our relationship of engineer / musician very quickly seemed as if it had existed for years. Corin's advice was basically to get a great performance with a live feel. Working with Corin was one of the most pleasant musical experiences I have ever had. I felt like Corin and Will were old friends I had known for years.

Favorite Guitars
A few days before going up to record my CD at Will Ackerman’s I had convinced myself that I should get a new guitar. With my limited funds, I thought I would probably end up getting a new reasonably priced, but somewhat reputable guitar. The model I had been really chomping at the bit for was a Martin D16 GT but it was out of my price range. I took a trip up to my local Guitar Center, strolled into the acoustic guitar room and started checking out guitars. I tried a bunch of them without much luck. Eventually I went over to one of the private rooms they have at the end of the gallery. As soon as I opened the door, hanging on the wall, staring me in the face was a Martin D16 GT. And it was second hand so it was well within my price range. I picked it up, examined it and started playing it. After playing it for about half an hour and loving it, I took it home with me, wondering all the way home who at Guitar Center knew I was going up to record at Imaginary Road. It just had to have been placed there for me on purpose! It is my very favorite guitar and still to this day I cannot believe I bumped into it right before my recording. It is a Martin D16 GT made in USA. I use Martin Acoustic SP Light strings.

Musical Influences
My strongest influences have been J.J. Cale and Michael Hedges but include many other artists. My favorite albums amongst the many are J.J. Cale's Naturally and Michael Hedges’ Strings of Steel. After years of learning scales, theory, and music composition, that all gets tossed aside when I compose. I retune my guitar to nonstandard tunings so that my ear will be the one in charge. My tunings range from DADGAD to AADF#AD.

Review for Emancipation CD by Robert Silverstein
With a career that followed being born in the Mediterranean island of Ibiza and then starting one of the first critically acclaimed rock bands in Ibiza in the ‘80s, guitarist Max Goldston returned...
p
A
n
E
F
Song Title by Artist Name
987654d
LM
iAnEAqqqq