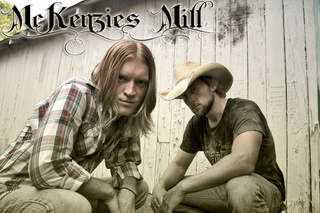 Born and raised in the small southern town of West End, North Carolina comes the rocking new duo...McKenzies Mill. Founded by brothers Justin and Ryan Harris, the boys along packed their bags in the fall of 2005 and relocated to Nashville, Tennessee. After recording their debut album in the winter of 2006 McKenzies Mill set their sights on spreading their unique blend of harmony based southern rock/country. Combining down home subject matter and a natural story telling ability their lyrics take the audience on journeys from the campfire to the barstool, down dirt roads and blacktops, slinging gravel and finding plenty of trouble along the way. Through unique guitar based anthems and soaring harmonies that can only be captured by brothers, McKenzies Mill promises “one hell of a ride” Come listen to the tunes and take a night out partying with Mckenzies Mill...you will find yourself coming back for more!

McKenzies Mill is back! by
Southern Rock is Back!! Old school southern rock with a refreshing modern sound. McKenzies Mill's descriptive songwriting, infectious guitar hooks, and harmonies that can only be captured by...
p
A
n
E
F
Song Title by Artist Name
987654d
LM
iAnEAqqqq