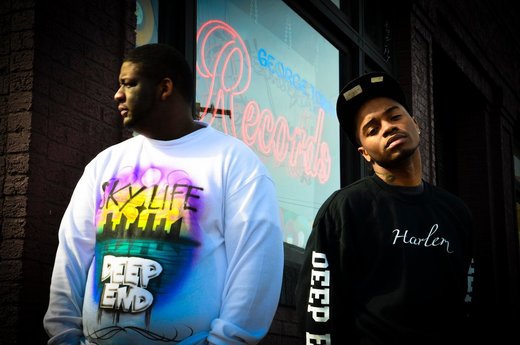 ichael Mack Jr aka Mike Mack was born and raised in the Central Area of Seattle, WA in 1989. Showing and interest at a young age he found himself competing in a singing competition in the 5th grade to have a position in a choir that would then sing behind Celine Dion at the Key Arena. He won his spot in this choir, noting it as a memorable experience with a big smile on his face. This is where and when his interest in music really took off. Hugh Brown aka Harlem was born in Harlem,NY in 1989 and moved to Seattle around the age of 13. His first love was basketball but had always had a variety of musical influences around him within his own family.It was not until he moved to Seattle that his love of hip hop manifested into a true passion and goal in his life.

Mike Mack and Harlem by Aiden R.- Hip Hop Habit
“ If their blunting moniker and shady street side pose don’t scream rough riding east coast smack-you-in-the-mouth ’90s rap then I don’t know what does. I’m not sure that’s more because Mike Mack...
Mike Mack and Harlem by Aiden R. -Hip Hop Habit-
“Mike and Harlem relay their vision for the future in “Look Into My Eyes,” a track subtly sending listeners the message that they’re secretly in on something that’s going to be big.”
Northwest Best by Q Dot-Q -Dot's Megaphone-
“Mack & Harlem is hip hop at it’s essence no imitations no limitations which is more than what I can say for a LOT of Seattle “hip hop groups”. ”
Fan Comments by Tarik Trotter -Fan-
“I see a lot of Biggie in you. This is amazing and very inspiring! Keep up the hard work, I promise you it'll pay off.”
Mike Mack and Harlem by Aiden R. -Hip Hop Habit-
“Out of all the duos covered in Hip Hop Habit, Mike Mack and Harlem seem to be the most well balanced. These two find themselves on different ends of the spectrum in geography, tone and physical...
p
A
n
E
F
Song Title by Artist Name
987654d
LM
iAnEAqqqq