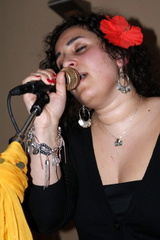 Born and raised in Cairo Egypt, Nadya Shanab always expressed her love for music in many ways. However, only recently has it become a mainstream focus of her life.

She has interrupted her studies of Sociology and Mathematics at the American University in Cairo (AUC) to pursue her dream of becoming a singer/songwriter. She is currently studying at the Paul McCartney's school; Liverpool Institute for Performing Arts (LIPA) for a BA (Hons) degree in Performing Arts Music. From 2005 to 2006 she was part of an acoustic band "LIKE JELLY" which quickly gained popularity within the AUC and CISV communities after performing at the opening of an event at the AUC as well as performing at Sakkia't El Sawy Culture Wheel as part of CISV's "DRUMMING" event. LIKE JELLY consisted of four members; Mohamed el Quessny (MOE) on lead guitar, Mostafa Tareq (MOOSE) on bass guitar, Nadya Shanab lead vocals and Youssef Atwan on rhythm guitar and vocals. They played covers of the likes of; Alanis Morissette, Dispatch and Jack Johnson as well as their own original pieces.

She has had 3 of her original songs (Boy, Just So Tired and Ain't Nothing But Tears) aired on "Nile FM" one of Cairo's main radio stations over the last two years. This summer, Nile FM asked to host Nadya Shanab for an evening of live music and a bit of a chat. In June '07, she performed In A Fit Of Remorse, Ain't Nothing But Tears and Ticking Bomb live on an acoustic guitar for Cairo and The Middle East.

Nadya has also performed several songs alongside a local Egyptian band; "Blues on the Rocks" covering the likes of Tracy Chapman, B.B King and Bonnie Raitt.

More recently she had her first "proper" Sakkia performance in Cairo, where she played for a full Wisdom Hall - about 300 people. She treated the attendees to a collection of covers and her own work with an Arabic twist. She was also hosted by the Egyptian Satellite Channel program "Sayedaty" where she played four songs on live TV which aired all over The Middle East, Europe and the USA.

She is currently working on her project "Property of Nadya Shanab" and original material as well as integrating more Arabic elements into her music.