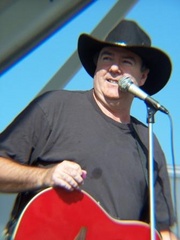 Born in Chesapeake, VA, singer/songwriter Nate Sparks has released two alt country/rockabilly CDs to international and critical acclaim. Nate’s singing has been influenced by country greats ranging from George Jones to George Strait. His deep and resonant vocals are reminiscent of a young Johnny Cash and his songwriting has been compared to Willie Nelson’s early days as a writer in Nashville. Writing songs since the age of 6, Nate has developed a sound that will definitely remind you of what country used to be without compromising production or originality. Nate’s original music is written from the heart and for the head. His songs can be touching and romantic ballads or humorous and insightful up-tempo songs. Meanwhile, younger audiences are drawn into his alt country style that competes with the best of today’s country superstars. Today’s Country Music magazine says, “Sparks…begs to be compared to Trace Atkins” and that he will “blow you away when hitting play.” Sparks’ first CD, From Where I Stand charted three songs into international playlisting with the single, My Greatest Success charting in Toronto, Canada at number two for the week of January 5th, 2006 (RadioWave Monitor). The same single charted at number 8 in Perth, Australia on W-FM and was produced into a music video that aired in the United States and Australia. Cashbox magazine said, From Where I Stand was full of "fine lyrics with catchy twists". On Nate’s second release Carry On, singles charted in station playlists in the U.S., Canada, and Australia. A single from Carry On, It Takes A Fire was produced into an animated music video that was screened at the 2009 International Bornshorts Film Festival in Denmark and has aired on cable stations across Australia. Nate has been nominated to receive the Governor’s Award for the Arts in Virginia, finished in the top ten in the Music City Songwriter’s competition and received a Fan Favorites award for his single, My Greatest Success from Super Country Hits.com. Nate has released ringtones of his songs and his ringtone from the single, Daddy’s Shoes has been downloaded over 35 thousand times. The Daddy’s Shoes ringtone was selected as the ringtone of the day for Father’s Day in 2007 by mixer.com. On top of releasing original music across the globe, Nate has produced jingles and corporate videos, engineered for major recording studios, and has performed as a backing musician for other artists. His music has been heard on television and radio commercials, in corporate conferences and training sessions, and backing releases for artists worldwide. While doing all of this, Nate has also finished his education by obtaining a Bachelors in Psychology, a Masters in Special Education and completing his Doctorate in Education. He works with students having disabilities as an Education Director for a major University hospital. He is a proud husband and father and lives with his wife and children in rural Virginia. Nate continues to perform in the mid-Atlantic region and continues to release songs for Common Stock Records. Nate's live show features country originals from their two internationally acclaimed CDs and songs by country legends including Merle Haggard, Johnny Cash, Tanya Tucker and others. Performing before crowds from 50 to 50000, Nate's shows are filled with down-home humor and good country pickin! A Virginia favorite is the Christmas Show featuring special lighting effects, multimedia, and his hilarious Christmas tunes. This show is only available for booking between Thanksgiving and the weekend before Christmas!

Nate Sparks and the Pamunkey River Ramblers are open to performance opportunities in the mid-Atlantic region. Current performance preferences are larger venues and typically include fairs, festivals, campgrounds, amphitheaters and performing as opening acts. The band may provide public address system and lighting for additional costs. Fees are based on the time of year, current performance schedule, and current demand.

RadioWave Monitoring Chart by RadioWave Monitoring Service
Chart from Montreal Canada; station playlisting for My Greatest Success Number 2 song! January 5, 2006
RadioWave Monitoring Service by RadioWave Monitoring Service
Toronto Canada station playlisting: From Where I Stand; Number 22!; November, 2006
The Artists and Their Music by Americana Rhythm
From where Nate Sparks stands in West Point, Va., things are looking pretty good. " From Where I Stand has all the makings of a classic country recording." ...I am sure we will be hearing a lot...
Indie 104 Los Angeles Airplay Charts by Indie 104 Station Playlist
Chart action Los Angeles California; Indie 104 station playlisting: Number 35!; My Greatest Success; january 23, 2007
Country Singer Racks Up Variety of Successes by Virginian Pilot
My Greatest Success is being played in radio stations across the U.S. and Canada.
Just Plain Good/April 2009 by Today's Country Magazine
“Sparks…begs to be compared to Trace Atkins.”“The cuts that make up this album are just plain good.”“Nate Sparks will…blow you away when hitting play.” -Today’s Country Magazine
p
A
n
E
F
Song Title by Artist Name
987654d
LM
iAnEAqqqq