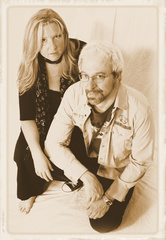 Pairadeux is Denver's "Hardest Working Duo"!!!For 90+ performances a year Pairadeux is in disguise as a "not so mild mannered" Rock Duo, entertaining and delighting fans with their unique versions of beloved rock songs and hot original songs. Pairadeux - One man, one woman, one unparalleled musical experience.There are cover bands, there are acoustic ensembles, there are electronica groups—and then there’s Pairadeux, the Denver duo that is all of the above, topped by a sweet coating of Colorado soul. With a sizzling mixture of various musical styles, unique cover renditions, skillful improvisation, high energy and raucous wit, these two exhibit a sound and presence like no other.A pair of friends sharing their love of rock & roll’s rich tradition with all who hear; such has always been the essence of Pairadeux. Those convictions speak to people of all ages, bringing younger audiences into classic rock and older listeners into newer music.In live performance, Pairadeux specializes in wide, dynamic sound from a minimalist operation. Miss Elizabeth’s voice is compared by many to Janis Joplin and Ann Wilson (among other lady greats). Neil’s acoustic guitar mastery, with its electric infusion, along with live loop sampling and multi-effects synthesizers for both guitar and vocals, has become Pairadeux’s legacy, and a force with which to be reckoned. Their cover-tune renditions have earned their own reputation as consistently fresh, stirring, unique and, more often than not, better than the original compositions.This talent is evident more than anywhere in Pairadeux’s latest exciting release, Pairadeux Under Cover, Part Deux. On this double-album, Neil and Miss Elizabeth have effectively blended all of their strengths into one. Disc One features their acclaimed interpretations of cover songs, as studio cuts and live recordings. Disc Two graces fans with some of their captivating original music. Featuring fan-favorite covers like “Take Me to the River”, “Over My Head (Cable Car)” and “Rhiannon”, as well as sultry original compositions like “Til I Surrender” and the uplifting “Perception”, Pairadeux Under Cover, Part Deux is their most auspicious work to date.Pairadeux’s thrilling stage display and distinctive sound has entertained thousands across the USA and around the world. With three albums, hundreds of gigs, thousands of sales, and some of the most diverse and cross-generational audience loyalty ever seen in the west, Neil and Miss Elizabeth have planted their flag—and the masses are rallying!

Stage size: minimal; enough room for two people, plus a place to set our guitars when not in use. Amplification: Pairadeux has their own Bose Sound System, mics etc., suitable for small to large sized rooms. We also work well with venues that have their own sound system.For venues WITH their own sound system, here's our preferences:Mics: two vocal, Mic stands: all mics stands w/booms. Direct boxes: need two direct plug-ins for guitarsAmps: N/A PA system: Yes. 5 inputs minimum, to handle three mics and two direct plug-ins for guitars. One or two monitors needed; separate EQ for monitors preferred. Signal processing: reverb/delay preferred if available. Stage monitors: two preferred, can manage with one if it's a small stage. We prefer two monitor mixes if at all possible.Lighting: whatever is available. Sound technician: preferred if available. Stagehands: Nice if available but not necessary. Dressing room: O.K. if available but not necessary. Transportation/accomodation: TBD. Additional requirements: bottled water to be available.

Cottonwood Country Club, Torrington Wy, USA by Terri Delgado, Manager
They were absolutely wonderful. Had the crowd dancing pretty quickly after dinner--we will definitely have this band back!!! They were plesant and professional to deal with, and were perfect for...
BolderBOULDER Bootlegs Vol. 3 by Bolder Boulder, CO USA
Score", original song by Pairadeux, was selected for inclusion on the 2006 BolderBOULDER Bootlegs Vol. 3 CD. The CD was issued in conjunction with the BolderBOULDER Memorial 10K Road Race, held in...
The Lodge Casino, Black Hawk, CO USA by Kris Borne, Events Coordinator
Both our customers and employees liked the performance by Pairadeux the first time they played here....we immediately booked them for a repeat performance and plan to include them as part of our...
Buffalo Bill Days Festival, Golden Co, USA by Bill Pazar Event Organizer
(Pairadeux) appearing at Buffalo Bill Days for 4 years running says it all!
Show review: Lannie's Clocktower Cabaret, Denver C by What'sDoingTonight.com
...Pairadeux kicked off the musical performances with Elizabeth delivering her rich, powerful vocals to one table at a time
Cactus Jack's Saloon, Evergreen CO USA by Gary Mitchell Jr., Owner:
As a music act, they (Pairadeux) were a huge hit on our creekside patio....audience response was great and they kept people here drinking and eating. They have a diverse music catalog to draw from...
--Shannon H. Conifer, CO by Gigmasters.com
Not only were Neil and Elizabeth extremely friendly and open from the get go.... but they worked with us to make our wedding day the best ever! They were (are) amazing! We have had so many...
by
p
A
n
E
F
Song Title by Artist Name
987654d
LM
iAnEAqqqq