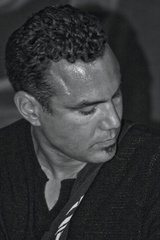 Kelly with his unique 'acrosstic' style of lyric writing and ear catching melodies, has garnered clandestine acclaim in the music industry as a prolific songwriter and collaborator.  He says "it's neat" to have fans that include the likes of Bernie Taupin, Elvis Costello and Artie Kornfeld (the father of Woodstock 69).

Currently he spends much of his time writing, collaborating and recording some of his 'best works to date'. Kelly often performs acoustically with renowned bassoonist Jeff Burke as "Kelly-Burke".

Kelly's favourite quotes :
"That'll do" Randy Newman
"Two Out of Three Ain't Bad" Jim Steinman
"We may have limped onto Broadway as the underdogs, but underdogs bite back occasionally" Bernie Taupin