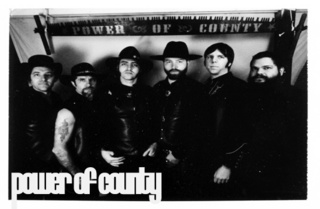 The Power of County brings the success and failures of turn of the century boomtowns into the forefront of their music. Highly reminiscent of days gone by with lyrics that reflect chaos, excess, lust and murder mixed with hard hitting rock n roll that is guaranteed to make any spectator want to buy a horse and start brandishing a six shooter.

Buy their new album "See You In Rock N Roll Heaven" at theunionrecords.net