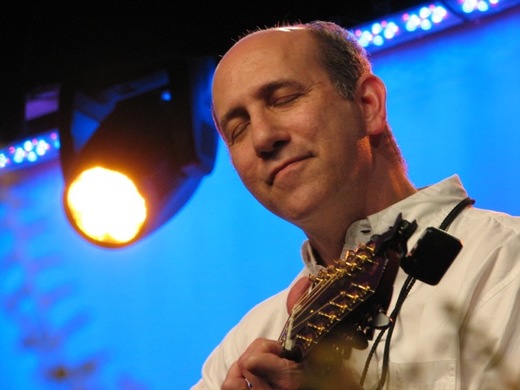 Fingerstyle guitarist Richard Gilewitz lives up to his position of a player of multiple genres with his rousing performances filled with amazing chops, humor, and a history of the acoustic guitar from blues to folk, traditional to classical and somewhere in between. States Spectrum Magazine, “Much of the charm of a Gilewitz performance is in the stories he tells. He wondered aloud to the audience how many ducks he could take out in a fight if he were to be attacked by a flock of the sneaky waterfowl.”

Recognized in the international field as a musician who composes and performs a kaleidoscopic mixture of instrumental selections, Richard forges a unique voice to include the expanse of his influences as his complex and energetic original works become stories from the guitar. His use of banjo style picking patterns, classical arpeggios, tapping and harmonics, as well as a rhythmic and percussive approach, bring a fresh impression to the listener. According to 20th Century Guitar Magazine, “A powerhouse of eclectic guitar styles and genres, Gilewitz wears his influences well.”

As a youngster, Richard embraced such diverse artists as The Beatles, Andres Segovia, Kraftwerk, Leo Kottke, J.S. Bach, Arlo Guthrie, John Fahey and Flatt & Scruggs. Soaking up the wealth of inspiration supplied by the assorted acts featured at the Renfro Valley festivals, “The Dr. Demento Radio Show” and “The Midnight Special”, Richard welcomed the challenge of mastering and adapting many styles of music for the acoustic guitar — a trait that continually places him among a multitude of genres.

Richard began honing his skills both as a performer and composer during the late 1970’s at the University of Alabama, playing the local coffeehouse circuit while pursing degrees in Computer Science, Mathematics, and Music. Following graduation, Richard placed his musical calling in the background and joined the world of flight simulation design, telemetry and satellite systems. Soon the pull of his passion for performing and recording was so compelling that Richard left corporate life to teach and perform full time in a career that has propelled him across countless countries worldwide.

The 1980’s brought Richard to Florida where he released his first LP recording, Somewhere In Between. He has released seven more recordings, Voluntary Solitary, Synapse Collapse, The Music of David Walbert, Thumbsing, Live at 2nd Street Theater, Strings for a Season, and Tasmania Live –  plus instructional guitar videos,  interactive CDRoms and self produced solo instrumental collections. Collaborating with Mel Bay Publications, Richard has released Acoustic Fingerstyle Guitar Workshop, a book based on his guitar workshops, along with a DVD of “All Time Favorite Fingerstyle Guitar Tunes”. His interactive DataDVDs, “Fingerscapes”, “Guitar Foundations”, “Slide Guide”, and “Fingerstyle Narratives” are available through TrueFire.com.

Aptly named as one of the “Men of Steel” by Fingerstyle Guitar Magazine, Richard regularly fascinates his audiences with fingerstyle gymnastics while spinning yarns too unbelievable not to be true. In addition to his concert performances and recording sessions, he presents instructional guitar and sound reinforcement seminars worldwide, bringing a vast experience of teaching and touring to listeners of all ages and players of all levels. Based on Richard’s eclectic mixture of stylistic approaches to the acoustic guitar, he offers substantial insights and amusing takes on fingerpicking patterns as a “language” for 6 ad 12-string guitar. His “Meet the Artist Program” (Music in the Schools) for primary, middle and high school students, and group seminar sessions for college music departments, incorporates Richard’s vision that music is an art of many spectrums.

Today, acknowledged as one of the most unique and humorous performers on the contemporary acoustic scene, Richard is respected worldwide for his command of the 6 and 12-string guitar. He continues to work on his craft under the direction of classical guitarist David Walbert, who has studied with renowned violinist Frances Magnes, and guitarists Gil de Jesus and Sophocles Papas. Richard is also a contributing writer for Mel Bay Publications on-line magazine, Guitar Sessions®, Singer & Musician, Fingerstyle Guitar, and for a number of trade magazines and industry blogs. International Public Radio fans often sample Richard’s wit and zany outlook on life on syndicated shows such as RTE Lyric Radio of Ireland, BBC radio of Northern Ireland, BBC Orkney, National Radio New Zealand, as well as numerous local radio shows in America.

But it is his live shows that bring out the best in this artist who follows a distinct cadence that creates a glow that continually grows a little brighter with each tune. “Gilewitz fingerpicked with such graceful facility and improvised so intelligently that he is a guitarist to follow here,” observes The Washington Post. Whether playing solo, conducting guitar seminars and school programs, or sharing the stage with fellow performers, Richard Gilewitz always creates a sparkle of mood mastery and wonderment.