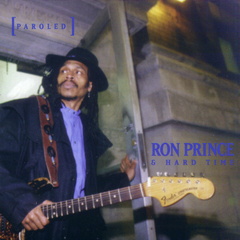 RON PRINCE AND HARD TIME RON PRINCE, known best for his eleven year affiliation with the Kinsey Report, was ten years old when Willie Dixon opened his studio four blocks from Ron's house on 76th and Racine streets deep in Chicago's Southside. It would be four years before Ron would start hanging out there. At twelve, Ron's Dad bought him his first guitar. At fourteen the budding young guitarist helped form The Brighter Side of Darkness. A group of kids from eight to sixteen years old. They quickly caught the eye of the legendary Chess brothers. A family decision to move to Decatur, IL forced Ron to leave Chicago and the band, but a musical force had been unleashed in him and on the world. Ron played with local bands down in Decatur while finishing high school. In 1976 he moved back to Chicago where he enrolled in the greatest blues school in the world: Theresa's Lounge on Chicago's Southside. He was amongst many pupil's of the legendary guitarist Sammy Lawhorn; John Primer and Jon Watkins to name a couple of his upper-classmen. The twenty-year-old Ron immediately started gigging with Johnny Dollar and the Scandalous Band, Bobby Rush and Syl Johnson. At the same time he was gigging with a group of guy's his won age in a band call Mona Lisa. They had the opportunity to open shows for some greats like the legendary Howlin' Wolf. Deeply rooted in the blues these young players began emulating the more avant-garde rock musicians and found themselves at the forefront of the black Rock/Blues movement. In 1978 Ron teamed up with Donald Kinsey who had just finished a two-album stint with Reggae king Bob Marley. Kinsey, Ron, Joe Thomas, (Ron's present day Bassist) and Ralph Kinsey on drums recorded an LP as The Chosen Ones. This record was recorded at Pop Staples studio on 103rd and Michigan in Chicago. The band relocated to California for three years. It was during this time that Ron did a stint with Bobby Ingram. After three years Ron moved back to Chicago where Donald Kinsey had already formed The Kinsey Report with his father and brothers. After two years of gigging around Ron was hired by the Kinsey's and he remained with them for over eleven years. Ron recorded Four albums with the group; two on Alligator Records, one on Point Blank and one on Blind Pig Records. Before forming his own group, Ron Prince and Hard Time, Ron left the Kinsey’s and held down the guitar seat in the legendary James Cotton Band for two years. A rhythm orchestra unto himself and a lead guitarist who stands along side or above the best, in an era over loaded with guitar heroes, Ron Prince, the veteran musician, is now taking center stage. Combining the deep blues of Chicago's post-war era and the more modern sounds that were born from this era, Ron Prince and Hard Time embody over three generations of THE BLUES. Email:ronprincemusic@yahoo.com