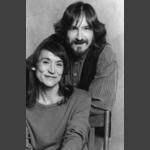 Influenced by the great music of their era, this husband and wife duo were baptized by bluegrass music and have made wonderful folk music ever since. Accompanied by Gary's tasteful Gallagher guitar and dobro, Roberta plays the American born Appalachian autoharp. With many recordings to their credit since 1976 , harmony singing is their signature.

The Gordons have been bringing their music to audiences since the 1970's, when they began touring throughout the Midwest, playing clubs, fairs, festivals and colleges. Their band featured guitar, banjo, fiddle and upright bass with Gary on lead guitar, dobro and vocals and Roberta Gordon singing and playing the autoharp. During this time The Gordons recorded two albums, both of which received national radio airplay.

Just as The Gordons had built a solid fan base through the Midwest, they amassed a sizable following in the Carolinas throughout the 1980s, playing festivals and fairs as well as making two acclaimed performances at the Mint Museum in Charlotte. By the late 1980s, they were working again in the midwest, and played a $150.00 per ticket show in Chicago at the Swiss Grand Hotel. In 1989, they recorded with dobro great Josh Graves and bluegrass fiddler Kenny Baker, from Bill Monroe's Bluegrass Boys. The resulting album, Old Time Radio Show, and live concert at Cincinnati's celebrated Old Time Music Hall were considered triumphs by critic and fan alike. The Gordons kicked off the ‘90s by releasing Wasn't Born To Follow, which also featured fiddle great Wade Ray.

In 1995 they released Family Bible, and their unique sound began to receive national and international recognition. Bluegrass Unlimited commented, "With Family Bible, The Gordons have created an exhilirating gospel package capable of drawing widespread attention." And widespread attention it did receive. Radio recognition was swift, and the single "Dust On The Bible" was praised in Europe as well as the U.S. And the consensus was concurrent: As Dave Higgs of WPLN's Bluegrass Breakdown show Nashville,Tennessee said: "I'll be spreading The Gospel According To The Gordon's here in Nashville."

European acceptance of Family Bible added to the thrill of The Gordon's 1996 tour in Ireland, where they performed live in Dublin on R.T.E., Ireland's national television network. They additionally played on live radio and at several hotels. The Gordons were hosted by the Irish Bluegrass Music Club who have invited them back for a second tour. On hearing End of a Long Hard Day, Richard Gladney, of the Irish Bluegrass Music Club said: "Rest easy, Mr. Monroe. Your music is in good hands."

In the spring of 1997, together with Reception Records, The Gordons released End of A Long Hard Day.

"With their warm, glowing vocal harmonies and impeccably clean and uncluttered picking, the Gordons bring to mind that most listenable of all bluegrass bands, the great Flatt & Scruggs. And, like Flatt & Scruggs, the Gordons are wide-ranging in their song selection. Above all these qualities, however, is the fidelity with which the group conjures up memories of a sweet rural world now long vanished." -Edward Morris Journalist and Former Country Music Editor Billboard Magazine

In the following years, The Gordons returned to Ireland three times, the Czech Republic, and the Netherlands, where they took part in the first ever European World of Bluegrass Festival Series held at venues throughout Holland under the auspieces of the International Bluegrass Music Association. During this time they also released Summervilla - Home in the Heart, from Reception Records, recorded live in the historic anti-bellium mansion Summervilla located on the Cape Fear River in Eastern North Carolina.

On the heels of the Summervilla album came The Gordons - Live in Holland from the Dutch label Strictly Country Records, featuring Gary and Roberta returning to their duet roots, using only guitar, autoharp, dobro, and voice.

In 2002, they released "Time Will Tell Our Story", featuring first-rate help from the likes of Alison Brown (banjo) and fiddle from Robert Bowlin, whose musical partner Wil Maring also plays upright bass. Yet again, it was critically praised -- Bluegrass Unlimited stated that it was "one of the strongest spiritual releases of the year".

While they took time off from the road to focus on Gary Gordon's new recording studio, Inside-Out, they did not stop writing songs and recording, and the result is the latest release, in 2007, "Our Time". With the new release, Gary and Roberta will now head back out on the road to play as a duo once again.

Bluegrass Unlimited, December 2008 by Bluegrass Unlimited
It's always nice when the look of a CD faithfully represents the music within. In the case of "Our Time" the Gordons (Gary and Roberta), a simple and tasteful picture of the two of them standing...
p
A
n
E
F
Song Title by Artist Name
987654d
LM
iAnEAqqqq