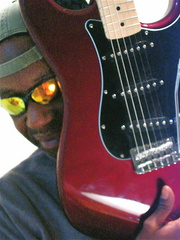 Every since Tim can remember he’s always had an intense passion for music. Like most he grew up listening to Motown and was truly inspired but what really did it for him were sounds like Nat King Cole’s “The Christmas Song”, John Coltrane’s version of “My Favorite Things” and the soundtrack of “The Westside Story”. You see his older sisters were the main suppliers of the music he was exposed to early on. As a result Tim was introduced to a healthy myriad not to mention styles of music. Mind you he still grooves to several genres but truth be told at heart he’s a straight up rocker. Originally Tim was homegrown in Philadelphia, PA as for now he’s anchored in Lansdowne, VA. As a rule he doesn’t listen to mainstream artists. All the music he downloads comes from artists that generally speaking most people will never hear. In his opinion, there are TONS of great indie and unsigned stuff on the Net that are just as entertaining if not more so.

Tim Sanders CD "Back In The Alley" by
Tim Sanders is a proficient and talented guitarist, keyboard player, recording engineer and producer from Virginia USA. Originally from Philadelphia, Tim grew up listening to many musical styles...
p
A
n
E
F
Song Title by Artist Name
987654d
LM
iAnEAqqqq