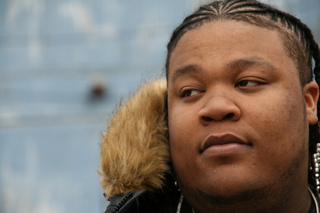 Standing 6'5", weighing in at 350 pounds and wearing size 18 shoes, TWANK has been dubbed the new upcoming king of rap. This ingenious, innovative young rap star from Houston, Texas, began his career at the early age of thirteen where he titled himself the "Big Twankie". Twank’s love for Hip Hop began at a very early age. Being the only child, he learned to pen his emotions and thoughts into songs. At thirteen he began recording his songs. His raw emotion and lyrical content captivated his listeners. His musical journey began in the spring of 2003 when TWANK performed at a freestyle contest during the “Kappa Beach Party” in Galveston,TX. The CEO of an independent label was so impressed by Twank’s awesome wordplay and delivery, he approached him about signing with the label. In June 2005 Twank released “TWANK IS COMING” with the singles “Git Yo Girl”, “Spill My Drink”, “Take Her Home” and “Greedy”. These caused such a stir on college campuses and radio stations abroad, he became the talk of the town. During this time he toured and performed locally in Houston and surrounding areas such as Louisana, Dallas, San Antonio, Beaumont and Austin to name a few. In January 2008, Twank’s single ‘Free’ hit the internet. His debut album ‘First Impressions’ is scheduled to be released in late 2008. He wrote all of the songs and produced most of the tracks on the album. Twank has also done drops for numerous artists and radio personalities and is acknowledged as “The South’s Best Kept Secret” - a refreshment needed in the world of Hip Hop today. His performance is captivating and his presence and 6’5 frame command attention. He has been tagged, and has well earned, the title of “The next Multi-Platinum Hip Hop artist rising from the Southern Region.” His story-telling lyrics are Hip-Hop at its best and his songs are filled with life and substance. He is the pioneer of the new generation with the flavor of “old school”. Twank has had the pleasure of sharing the stage with such headline artists as Ying Yang Twins, 112, Youngblood, Slim Thug, Mike Jones, Juvenile, Kioti, Scarface and Lil Flip, just to name a few and has has performed at "The Chocolate Factory", "The Tunnel", "Club Kartel", "Club Riddims", "The Orbitron" in Houston. Twank says he is driven by his passion for music. He said, “I am not a money-driven rapper because being money-driven affects your lyrics and content.” His mission is to touch lives positively and inspire today’s youth to pursue their dreams vigorously and keep their eyes on the prize. Although Twank has been compared to and is inspired by many of the greats in Hip Hop like Biggie Smalls, Tupac and Kanye West; he stays true to his own identity. Leading industry publications have said: “TWANK is the hottest new artist to hit Houston” - Ricco of RAP Illustrated Magazine. “TWANK is claiming territory in the streets of Houston with his unique style and power punching lyrics” - Carolyn Baker of Jam Source Magazine. “TWANK is the next new artist to blow” - Jeff 2x of Hip Hop Weekly Magazine. Stay tuned and look out for TWANK’S new album titled, “FIRST IMPRESSIONS”’ available on iTunes and Rhapsody now!!!

Converse Get Out of the Garage Urban Contest

November 2009 Converse "Get Out of the Garage" URBAN

November 2008 T-Pain Step in the Ring