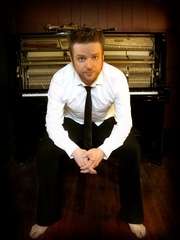 In the two years since his last original project, Tyler Summers has toured extensively, joining Canadian country star Johnny Reid across the north, and backing up various artists, from Texas indie band Spoon, to the queen of indie rock herself, Feist, with appearances on David Letterman and the Today Show. But back home in New York, he claims his territory behind the piano, with the release of his brand new EP, Astoria Sessions.

The Galaxie Rising Star Award - 2004 by IAJE Magazine
The Galaxie Rising Star Award is sponsored by Galaxie and administered through IAJE Canada and the National Jazz Awards. It is a cash award of $2000 and was presented at this year’s National Jazz...
Larry Nai Review by Cadence Magazine
Who says that all "Young Lions" revere only the Blue Note label? On the evidence of this enormously impressive debut, the peach fuzz on these guys' faces has been blowin' in the wind of imprints...
Lab band members showcase talent in jazz group Tyl by North Texas Daily
Considering the size of the music program at NT, it is probably not very hard to find a jazz musician here.The three musicians in the Tyler Summers Trio, formerly known as Trinity, however, stand...