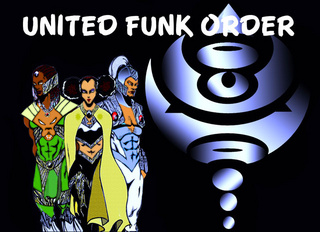 United Funk Order Royal Guards of the funk are here.. to protect the funk and nothing but the funk.....Puttin their cyber foot in it, they just beamed out of the studio, and onto the music scene. Intergalactic-Funk-Rock Band “United Funk Order” headed by the Multi-talented Lead vocalist Terra Momma, Master Guitarist Sonlight and Master keyboardist Taharka are pleased to present their new music CD set for first quarter release. The band’s vibe is rooted in classic funk and contains elements that appeals to all...

UNITED FUNK ORDER by WIIT RADIO FM - FUSION RADIO - BRIAN STINSON
Your welcome and it was a pleasure to have you on the show. Love your music and keep up the great work!
UNITED FUNK ORDER by WE FUNK RADIO
Show 570July 17, 2009 Endings & new beginnings: We lay down one last session with DJ Static in the studio, before he heads out to expand WEFUNK in Vancouver. Featuring lots of Wu affiliated...
UNITED FUNK ORDER by TWIN CITIES RADIO
Twin Cities Radio is proud to introduce you, our listeners to UNITED FUNK ORDER as our Featured Artist from the city that never sleeps...NYC. That means fun with a big K. We hope you enjoy their...
UNITED FUNK ORDER by NEW FUNK RADIO
After i heard your new track i want to tell you that your song "UFO Theme" is voted as the "Jam of the year 2010" on NewFunkRadio.com. All i need is a album cover and a link where ppl can buy your...
UNITED FUNK ORDER by Meg-A-Music Toronto
FUNK in Tha house! Dig the tunes & the vibe You guys really are quite amazing, I think you have a brilliant future in music! Let me know how you're doing once in awhile :) Much Love,...
Patje.FM United Funk Order interview by United Funk Order interview
ust beamed out of the studio, and onto the music scene. Intergalactic-Funk-Rock Band “United Funk Order” headed by the Multi-talented Thulani and Master Guitarist Indigois pleased to present their...
WDGP radio interview with United Funk Order by WDGP radio interview with United Funk Order
It was exciting to hear the passion and concern in the conversation between Thulani, Indigo and Hostess Diana as the discuss the Funk, the history, gave credit and shared the music. If you are...
UNITED FUNK ORDER - ALBUM REVIEW by
United Funk Order is a R&B group bringing some stylistic tunes your way. This group is on a mission to show you how this music thing should be done. They are bringing it with dedication and...
p
A
n
E
F
Song Title by Artist Name
987654d
LM
iAnEAqqqq