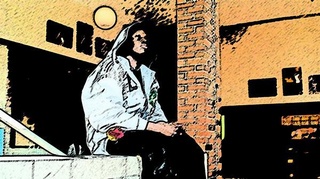 I remember Flow once said "I've been through so much, and I ain’t even 20 yet"! And that would be when a young, ambitious, dreamer grabbed my attention. His life story was like nothing I had ever heard before. But then he adds “That was life getting me ready for something big, real big. And now I finally have a clear vision. I know what I want"! And I thought to myself "This kid's got something"...
From Syria to Sioux Falls, Flow (Ukuk Moi) Youngin' becomes the CEO of STF Records joining with M.P to manage new talent and recruit fans to the rap movement. Flash back to May 7, 1992, during the time of the Civil War erupting in Sudan, Flow (Ukuk Moi) Youngin’ was born in Khartoum, Sudan. The Youngin' family wanting to provide a better life and educational opportunities for their children moved to a country in the Middle East called Syria. There were concerns of racial discrimination in his school, at first. From an early age, he began skipping school and hanging with trouble makers. By 2000, his love for rap music began to develop when Dr. Dre and Snoop Dogg became popular in Syria. He remembers rapping to 50 cents, 2pac, Notorious B.I.G, to mention a few playing on radio stations. After being introduced to hip-hop music, his interest grew along with the whole rap movement. Only dreaming of it in 2005, he moved to the U.S with his family. By 7th grade, he started surrounding himself with a group of kids who had rhythm with rhyming and beats. Eager to learn more, while still learning English, Flow met a local D.J named M.P aka Master Beats, a member of a local rap group in Sioux Falls called STF (Sioux Town’s Finest). Flow amazed by their rapping talent and popularity, took the opportunity, knowing what he wanted and believing that this was his next step. M.P began mentoring Flow, several months later, he started recording with M.P in STF studio. Four years later, Flow became the CEO of STF Records along with M.P. Quoting "Am just getting started, Fam"!