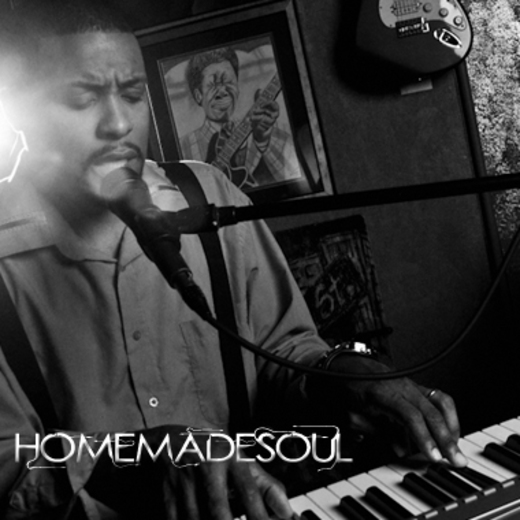 What do you get when you combine two ordinary and simple words like "homemade" and "soul"? Lifestyle, fashion, and music all bundled up in a ball of originality. Homemamdesoul is a brand. He is his own lifestyle, fashion, and music. Even though he takes his influences from many people, places, and things, what comes out in his lifestyle, fashion, and music is simply homemade. Born Curtis Clark Jr., he is the son of a preacher man, trained and bred in the church of Holiness. Homemadesoul lived a sheltered lifestyle, away from the many perils of this world. While friends played in the street well after dark, Homemadesoul and his two siblings played and sang in the house, under the watch of their loving parents. His mother started him in music at a very early age, making him and his brother and sister sing on the church program as a group called "The Clark Children" While completing his six year enlistment in the Air Force, Homemadesoul honed his skills and worked hard to perfect his craft of writing and producing. He performed many times for free and to small crowds, gaining valuable stage experience. He was sought after by the many artist who reside in the military, collaborating with rappers, singing duets with fellow singers, and producing many others. From the Sunday night church programs, to singing on stages all across America, and other countries such as Iraq, Kuwait, Guatamala, and Panama, to the stages of big festivals in Japan, Homemadesoul has traveled the long hard road as a singer, songwriter, musician, and producer. His voice has given him favor with promoters. His musicianship have garnered him praise from the many pastor's he has played for on Sunday mornings. His production has made him a sought after producer, producing for movie soundtracks, radio stations, and music librarys. From the times of singing the lead in the church choir, until now, Homemadesoul has released two of his own albums, shared the stage with a wide variety of national recording artist including, Bradford Marsalis (jazz artist), The Bluenotes, The Ying Yang Twins (hip hop), and rock group EVE 6. He has produced for the indie movie soundtrack, "STEEL HERE", which included performances by Krayzie Bone of Bone Thugs in Harmony. For all his hard work and dedication to his music, the biggest satisfaction Homemadesoul recieves is when an unknown person listens to his work and recognizes that it truly comes from the soul. Homemadesoul has just released his third full album entitle, "Tuesday Specials" This installment was created by releasing a newly created song for ten weeks straight in the Fall of 2008. This marketing plan enabled Homemadesoul's die-hard fans to download each track as it was being released each week, and new fans flocked to his music. The future is bright, and the sky is the limit. You never what you will get when you listen to Homemadesoul's music, but one thing you will know, is they will always keep it homemade.