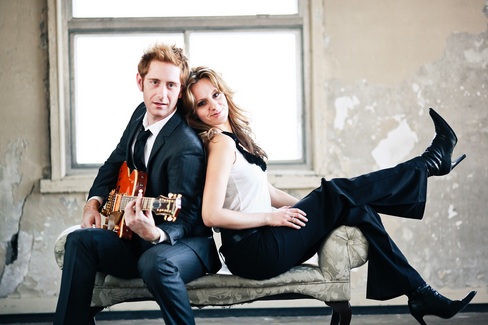 About Keith and Renee

What started as an awkward meeting through a friend turned music making magic has now brought Keith and Renee to ten years as a musical duo, but not without a whole lot of work and determination.

Starting out as a four-piece band and then branching off into a duo, Keith and Renee have so far released four albums with a fifth on the way this summer. Starting off with a folk-pop sound on Novice (2001), Simple Stuff (2004) and Revolution (2007), the duo saw much deeper interest from the public by the latter album as their single ‘Good Year’ was chosen as the Manitoba Homecoming 2010 official anthem song. Come 2010 with the release of their 4th album Detours, the band shifted their sound to a slight country-pop vibe which won them an even wider audience, along with a spot on David Suzuki’s Playlist for the Planet with “The One”.

For their fifth release, Best Day (Fall, 2011), Keith and Renee have veered toward a mature country-pop sound as well as taking their song-writing to a whole new personal level by recording as they were writing the new songs as well as tweaking them constantly along the way to create the best product possible. This approach made the band much more aware of who they are both as artists & songwriters at this point in their time together, all the while keeping their unforgettable harmonies and tight musicality well intact.

Keith and Renee, though, have never been about making music just to make money or hear it on the radio. Through the years, their humanitarian efforts and spreading the message of helping make a positive change through music has shined through. Not only by touring endlessly from coast to coast, but heading even further away to Dubai and Kenya, Africa as part of Free The Children. It’s here that the band shared their positive energy and ideas with the residents all the while helping them build a school and introducing them to their music with mini concerts, an experience that will always hold a place in their hearts. Along with those trips, Keith and Renee made their way to 150 schools across Canada speaking to over 100,000 youth hoping to reach them on deeper level by hearing the student’s own personal stories.

Besides on their albums, don’t be surprised if you’ve heard Keith and Renee elsewhere including TV, movies and commercials since they’ve landed placements with AT&T, Degrassi The Next Generation/ Degrassi goes Hollywood, Canadian Idol, Hallmark movie For The Love of Grace’, ‘The Kate Logan Affair’ film, and many more.

As much as Keith and Renee have accomplished musically thus far, they also spread the creative love in other areas including Keith working as a full-time Moksha Yoga instructor and Renee running Renee Leone Designs specializing in using recycled materials to make clothes and accessories.

With their hands more than full, Keith and Renee couldn’t be more looking forward to sharing even more of their music with the world. The “Best Day” is yet to come!