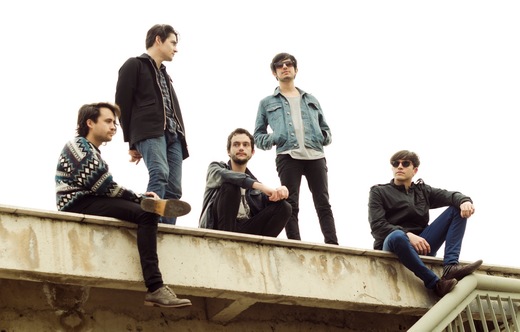 The walls really started to shake in 2010. After finishing up his studies of musical production in Montreal, Canada, Nico Parra (lead singer) came back to Chile and showed his demos to his ex-band partner Ignacio Ramírez (bass). Using them as a starting point, they mixed an electronic sound with analog instruments and thus they created a new band: Mecanico.

After releasing their first self-titled EP, Omar Van de Wyngard came in as the drum player, Fernando Soro added guitar and backup vocals, and Christopher Timmerman finished the setup with keyboards (being later on replaced by Malaquias Concha).

The vibes started to get going with their first home made EP and especially later on when they released their first single “Street Royal” (2011). Despite the fact that they hadn´t been together for that long, Mecanico got played in national and international radio stations. DJ´s and producers like Kolt13 (France), Shortcircuit (USA), Stingray Knight (Germany), and Moonlight (Australia) remixed songs from the EP. During this period Mecanico ended up reaching the number one spot on one of the leading Indonesian radio rankings.

A following abroad gave way to Mecanico sharing the stage with many international acts that came to Chile, such as Chromeo, Miami Horror, Bag Rag Raiders, The Sounds, The Raveonetts, The Twelves, Dntel, Uffie, Capital Cities, Jessica 6,Fred Falke and many others.

Without forgetting their Latin-rock roots, the band also reaches for American and European 80’s sounds and takes production influences from artists such as the King of Pop, Michael Jackson and the legendary Beatles. Mecanico’s second single, “Legacy” is about the importance of the legacy of these artists before them.

As far as style, there is not one clear influence on Mecanico´s sound. It is a unique, fresh  one and invites people to the dance floor. Mecanico goes from rock, to post punk, to funk, to pop. In order to describe it, Mecanico seeks to be an indie pop band, with rock influences, nu disco and 80´s sounds… everything to be expected for this new decade.