« See all of swiftandsilentprod's Songs 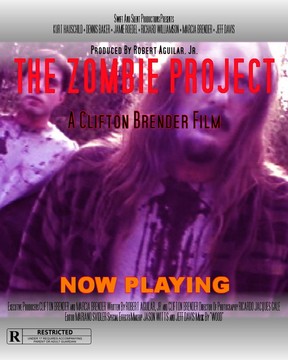 / 8:03
The directorial debut of Clifton Brender, THE ZOMBIE PROJECT is an experimental short Co-Written by Mr. Brender and Robert Aguilar Jr. The story takes place primarily at a hunters campsite in the middle of nowhere. Two unsuspecting men find themselves in the middle of one of the scariest mishaps in recent history when a science experiment gone wrong begins to
create mutant forms that crave the flesh and blood of all around them.
Uploaded: January 26, 2008
Duration: 8m 3s

Comments for the zombie project