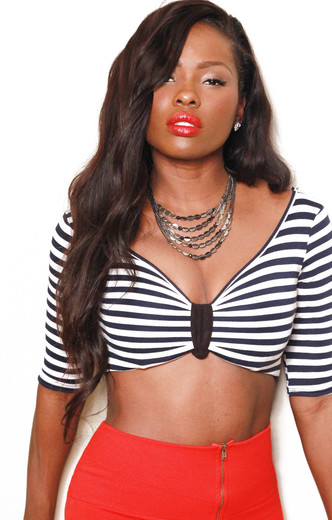 PATRICE grew up in a small village on the small island of Antigua located in the Caribbean. She began singing in the children’s choir at her church and eventually joined a 3-girl gospel group. The trio performed at numerous venues around the island including churches and talent shows. Patrice later gained wider exposure when she was chosen to represent her school by singing in Antigua's annual Carnival pageant.

After immigrating to the United States (San Diego), Patrice continued singing in church and joined two singing groups; one of which was another 3-girl gospel group. Together, they competed in various talent shows, local christian concerts, and landed coverage on two local tv stations. Years later, Patrice migrated to Chicago and this proved to be a pivotal moment as Patrice decided to “change things up” and began her journey towards becoming a solo artist. With the help of a co-worker also pursuing a career in music, Patrice began authoring her first demo as a solo artist. After various studio collaborations, Patrice realized that she had all of the components to produce/promote a full album and decided to do so. So with the help of Marwan (R&B/Soul Arist/Producer/Songwriter), who Co-Executively produced "Undeniable", her solo career had finally been born.

While working on her first solo album, Patrice aggressively hit the open mic scene in Chicago and Indiana to gain exposure and establish a network to promote her music through. This led to 3 of her songs--"Don't Break Yo Back", "So Right", and "Ain't No Changin' You"--being played on Chicago's WGCI (Independent Artist Program). On June 3rd, Patrice competed at the legendary Apollo's Amateur Night in NYC, where she took home 4th place and a cash prize. This success caused quite a buzz in the Chicago-land area and in her homeland Antigua. Since then, Patrice has been featured on Chicago’s 107.5 WGCI, Chicago’s 89.3 WKKC, Gary’s “My People” Online Radio, Antigua's local newspaper (The Daily Observer), and her music has been in rotation at two of Antigua's most popular radio stations (Liberty ZDK's Sun Radio & Vybz FM).

Often described as having smooth vocals and an undeniably sexy swag, Patrice has proven to keep her audiences captivated and wanting more. Her passion is music and she aspires to inspire people, young women especially, to never give up on their dreams no matter where they came from or who says that they can’t turn their dreams into reality. With her sultry vocals, catchy lyrics, and unique blend of R&B/Pop/Reggae flavor; this island girl from Yorks Village is well on her way to showing the world that anything is possible!

Caribarena.com
--“Patrice Forde is another example of young talented Antiguans following their dreams, proving that this little island is a melting pot of gifted people.” Patrice Forde – Future Singing Sensation

Vince Lawrence (R. Kelly's "Ignition" Remix/Slang Music Group
--“The singer's are singing tonight! Man that was really good... i was impressed, like your style.”

--“That was pitch perfect in every way, i love your look... you really nailed the emotion...it was a total pleasure to watch, i loved it!"

David Viggiano (FOX News Entertainment)
--“It was a wonderful performance! You look great...great song choice...you did a great job."

Mary-Kate – Patrice Fan
“Hey Patrice i just wanted to say hi and i wish you luck at the next venue you go to. I love your song "karma" it's really catchy…I just wanted to tell you that you should keep singing…I also sent your video "karma" to at least 20 of my friends and they love it.”

--“Patrice Forde is striving to achieve her childhood dreams of making it big in the United States music world.” Forde on the Road to Stardom.