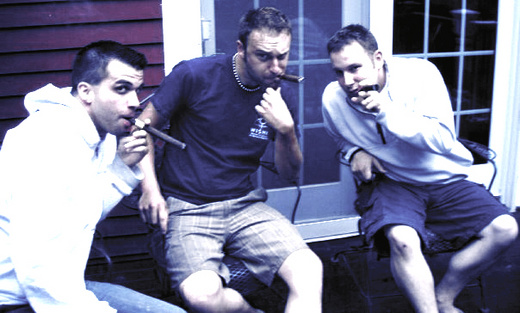 Preamble came to form because one guy knew a guy and another one married his sister. Peter and Josh knew each other in college and formed a short lived band by the name of Baltic Ave. About 5 years later, after not seeing each for that period, they decided to start up a new band. They had written some songs and were ready to take on the world. However, They came across the very rare problem of "not enough dudes." The band needed a bassist. As much as any band could really need a bassist. Josh one day had the idea, "Let's make Jay (Josh's brother in-law) learn the bass." They then approached Jay and were all like, "Hey, learn the bass and join our band." Jay replied, "All right" and they were on their way to playing in front of tens of people.

Preamble has played all around the Boston area at rockin venues such as Church, McGann's, The Hard Rock Cafe, Great Scott, Precinct, PA's Lounge and of course, All Asia. With above average attendance at most of their rock n roll music concerts,they are now ready to start booking stadiums.

Preamble is primarily influenced by the sultry sounds of the 1990s. Your pallete will dance with flavors from all of their favorite music cuisines of the decade including geek rock, grunge, punk rock and power pop.

Preamble plays music that is rockin' and fun. They have two goals for every performance. 1- Everyone has a good time and a few laughs. 2- No socks remain on any feet. (You know, cause of the rock.)

Jason Provost - Bass and some vocals