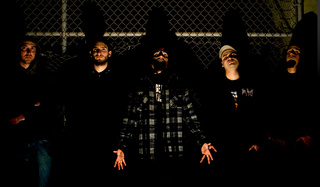 In January of the year 2005 A.D., 5 dirty rotten scoundrels from central New Jersey conceived a metal band called Abacinate. All of its members had previously played in other local bands, none of which are important to this story. What is important to this story is the trail of deaf audiences and empty beer cans that Abacinate has left in its wake. Mired in a sea of mediocrity and trend-following wanna-be’s, Abacinate’s story is that of a band that has abandoned all notions of what metal is to become what promises to be a watershed in heavy music.

Vocalist Ian Neal, guitarists Todd Stern and Brian Bae, bassist Matt Babulski and drummer Justin Spaeth hit the rehearsal studio in early 2005 with a long list of thrones to conquer and a take no prisoners attitude. Within 4 short months of choosing a moniker, Abacinate had already written and recorded their first demo (2005’s One Less Mouth to Feed) and hit the stage to give New Jersey a taste of their homemade brew.

Upon the realization that they had come up with a successful formula, Abacinate immediately started writing new music and cramming their schedule with shows. Slowly gaining popularity through MySpace and constantly playing live, the band began to establish itself as a must see act among other notorious New Jersey bands. By the following spring, Abacinate had written enough material to record their first 5 song EP. 2006’s Portrayal of the Grey Man was the most crushing music the band had offered the public to date, and it was the release of this disc that really sparked the interest of extreme metal enthusiasts nationwide.

Shortly after the Portrayal release, Abacinate signed with Epitomite Productions in the spring of 2007. Epitomite re-released Portrayal of the Grey Man as a split CD with New York’s God-Rot. During the following months, while still maintaining an overwhelming live schedule and fulfilling their obligations to part-time alcoholism, Abacinate still managed to compose all of the music that would later become their first full length recording to be released on EP. The band entered the recording studio in the summer of 2007 with one goal in mind: to obliterate and destroy all of their previous work with more force than necessary. During the recording process, Abacinate parted ways with original guitarist Brian Bae. In spite of the unexpected lineup change, the band forged ahead to complete the recording sessions with only one guitarist

Abacinate now stands ready to unleash Ruination, an uncompromising statement of what heavy music is capable of achieving. Ruination expresses brutality in its purest form, melding influences from all across the metal universe to forge a massive wall of viciousness. The maturation from Portrayal of the Grey Man to Ruination is immediately evident, showcasing a blend of classic death and thrash elements with highly refined songwriting. Abacinate has destroyed the mold that heavy music has found itself encased in, refusing to be beholden to formulaic recitals of tired clichés. In short, forget what you know about heavy metal. Ruination stands alone as a proclamation of change

With Ruination complete, Abacinate has rounded out its lineup with guitarist Justin Barteaux. Having already shared the stage with the likes of Testament, Napalm Death, Unearth, God Forbid, Through the Eyes of the Dead, Beneath the Massacre, Cephalic Carnage, Job for a Cowboy, Decapitated, Suicide Silence, A Life Once Lost, Animosity, Emmure, White Chapel and Necrophagist, Abacinate is preparing to launch its own nationwide tour during the Summer of 2008. With their new lineup and the most brutal record of the year in tow, the band is prepared to dominate stages all across the country. Prepare for the next chapter…