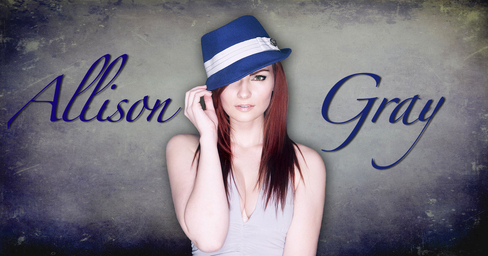 Allison Gray burst onto the scene in late 2010 with the release of Off My Mind. Her lyrical honesty and vivid imagery has reached listeners in every demographic and many have praised her for her original style. Her songwriting has earned top honors in the Great American Songwriting Contest, the 100% Music Songwriting Contest, The Malibu Music Awards, and Maurice's Small Town Sound Band Search. She has also been honored by California State Northridge as one of their artists of the year. Like many artists, Allison came from humble beginnings. She was raised in Seattle by a single mother who encouraged her passion for the arts. Gray began studying piano at age 3 and was classically trained in ballet and opera. After singing the national anthem for the Oakland A's she was invited to perform at Carnegie Hall and the Kennedy Center. She has also performed at Seattle's Benaroya Hall. Though a career in opera seemed the obvious choice, she often found more fulfillment in her songwriting. After graduating high school, she moved to California to pursue a career in mainstream music. In 2010, she teamed up with producer Mark Jordan for Off My Mind. Gray's music has been featured on Michael Buckley's "What the Buck", Dance Moms, 16 and Pregnant, The Voice, Kia Motors Advertisements, and the Canadian based reality series The Ave, which follows internet celebrity Gregory Gorgeous. She is currently recording her new album Barricades.