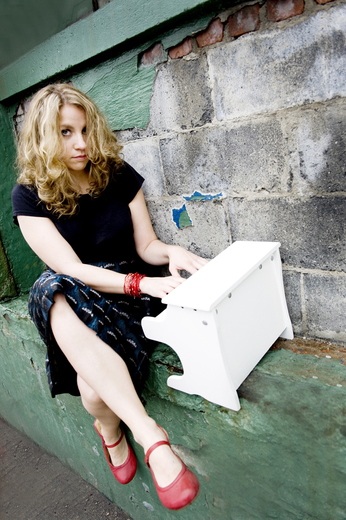 "Tartalia is to pop music what granola is to cereal." - NYRock.com.

Allison's Invention is a music project by singer-songwriter and multi-instrumentalist Allison Tartalia. Tartalia's quirky and eclectic songs, performed on piano, ukulele and kalimba, have made her a popular performer at New York venues like Mercury Lounge, The Living Room and Joe's Pub. The Emmy-nominated composer, who has shared a stage with the likes of Lelia Broussard, Petra Haden, Rachael Sage and Fred Armisen, has charmed and thrilled audiences throughout the country with her compelling and expressive performances. Allison spent this Summer touring the West Coast, Midwest and New England and more dates are planned for the year ahead.

On Sweet and Vicious, Allison's Invention digs deeply into her personal history and family struggles. On the EP's opening track, "Clean," Allison declares, "I am sick of this city/I am sick of being broke." It's an urgent plea for a fresh start that ultimately concludes with her decision to "strive to find a light instead." Though the songs on Sweet and Vicious were inspired by a particularly painful time in Allison's life (becoming her mother's caretaker after a terminal cancer diagnosis and the simultaneous unraveling of a serious romantic relationship) Allison's Invention writes from a space of clarity, growth and, ultimately, peace. "My mother's illness forced me to examine everything about my relationships and choices. Eventually I realized that the best way to honor her was to let go of the anger I'd been carrying around and start taking better care of the person she had brought into the world." There is a tangible honesty in her self-reflection that is rarely seen in other modern artists. Sweet and Vicious is a call to embrace the complexities of our decisions, take a look in the mirror, and find the beauty and balance within the pain of emotional growth.