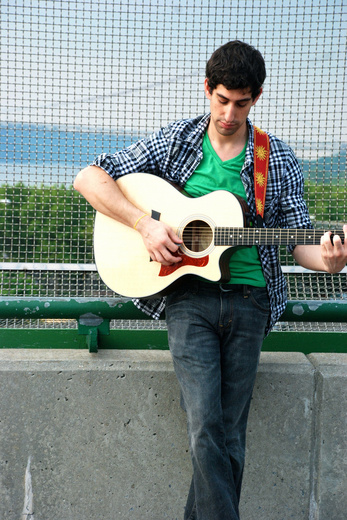 Ari Jacobson is a New York Singer/Songwriter with a unique style he’s dubbed “Folk-Pop with a Twist of Metal.” The music is an intriguing, skillfully-arranged blend—from acoustic folk-rock to power-pop, always with a little “twist” of rhythmic intensity that reveals his hard-rock roots. The tunes are slyly, insistently catchy, with lyrics hiding deep themes that linger in the mind and reward the 20th listening as much as the first.

Growing up in Haverhill, a small Massachusetts town on the border with New Hampshire, Ari showed a surprising ability to sing and a deep appreciation for music and performance that led him to an early love of both music and theatre. By the age of eight, he had memorized most of the Beatles’ catalogue, and his father was awkwardly explaining what “Norwegian Wood” was actually about.
Focusing on theatre, he didn’t pick up a guitar until the tenth grade, when a desperate attempt to impress a girl provided both his first utter romantic failure and the means to express his feelings about it. The rest was history.

Ari has been called everything from a Male Ani DiFranco to a cross between Frank Zappa and the B-52s. He likes the first comparison a lot.

He doesn’t know what the second one means, but likes that too.