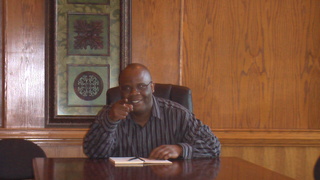 Born in Louisiana to middle class working parents he showed
interest in how music was made at a very early age. Chef as he is referred to by
most people beat on his mothers furniture so much she bought him his first drum
set at five years old. Chef lived near the local high school and attended the sum-
mer band practices watching the drummers rehearse. Most of these drummers
were heading to play in the world famous Grambling state marching band. He
idolized the drummers. Chef learned to play drums and found that he also was
able to write songs easily. He turned to hip-hop forming a label and producing
Hits like Lets Get Walking, Poon Palace and Game Over. But his lack of
knowledge in the music business made chef decide to close Swamp Flavor
Records in 2002. Chef decided to start again this time he formed the production
company The Sweatshop Productions. When asking a few people about Chef’s
abilities to create hits the most striking reply was “Multitalented is the
only way to describe this man” said a close friend of DaChef. “He thinks it then
he brings it to life lots of producers do the same but chef is different” said another.
With the compilation finished Sweatshop Compilation Volume 1 Chef is well
on his way to becoming in demand in the music industry.