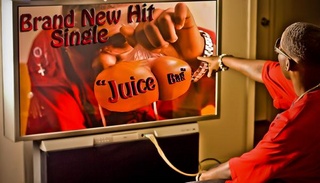 First of all...I would like to thank the almighty Jesus Christ, because without him I wouldn't be here to express myself today. He doesn't just give me life, but he gives me a divine gift to spread my voice unto the world. He has painted my vision clearer and has navigated my path, so as long as I have breath in my body I will not give up on the instruments of my voice or take this music industry for granted...Thank you GOD! You have made me everything I am today, and to all my true fans I love you and thanks for your support, keep holding me down ya'll!!!

Born and raised on the Southeast Side of Houston Tx, from a little kid playing basketball in the front yard of his house to becoming one of the most phenomenal rising stars in the music industry, Prince "Beezy Yung Blaq" Fitzgerald Walker has graced his Hip-pop/rap southern swagga to welcome to hear and feel his diverse style.

Wise beyond his years in the year of 2003, at the tender age of fifteen he was inspired by his older sibling and other great emcees like Ludacris, The Game, Snoop Dogg, Lil Wayne, Tupac, and many more to start rapping. He would stay up through the late midnight hours studying and perfecting his lyrics so he could be prepared to lace down the next big H.I.T in the studio the following day. Although the road ahead was very far, he was inclined to walk every step of the way with faith, patience, motivation, and strong perseverance.

By the summer of 2005, he was ready to experience what he would call the "Starstage". He began to perform at local talent shows, big club events, parties, and even called by promoters to open up for various artists and clubs. His entertainment is amazing! The way he uses unique creativity on stage is breathtaking, from the time the beat drops until the last big BANG he captures every eye of his audience. He recalls "Everytime I perform I like to do something I never did before, something different something that's gonna leave my fans with apart of me in their minds, hearts, and souls. My dad have always told me 10% rap and 90% of entertainment so that is exactly what I plan to give them."

Between performing and recording in the studio in the summer of 2007, he managed to create his first official myspace music page; and with this incredible creation, his fans have access to download songs, visit his newest youtube video's, get exclusive ring tones, read his latest blogs, and even CHAT LIVE with him by calling his fan hotline. Building up such a tremendously internet fan base, he became a popular icon on myspace and gained well' over 100,000 plus hits within a matter of a years time!

Now, Beezy Yung Blaq is ready to lay down a new foundation in his life, with the world saying his lyrics. Compelled by "Mess Up My Hair" the most ultimate club banger of 2008. This freshmen, but no freshmen at all; more of a trendsetter urging to make a breakthrough in this music industry. With his blazing debut album entitled "Dat Boy Beezy" will make Beezy Yung Blaq a household name in the Hip-pop era, so buckle down as this young star takes you on the ride of your life!