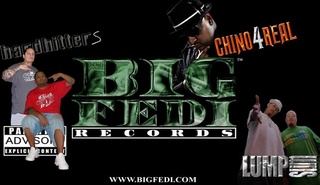 Big Fedi Records™ IS Utah's most consistent Rap/R&B record label. For nearly 10 years Chino 4 Real has been bringing several artists from across the country and laced the LAKE up with nothing but game. Off top BIG FEDI™ been in the game since '95. lil Dove & Dirty D, elder cousins to the EF-E-DEE-I laced a couple tracks on there boy Big Os freshman album titled "BREEZIN N' MAX'N™" out of Sacramento, Cal. In 2003 Big Fedi Records™ produced 2 albums. The 1st titled "The Greatest Snow On Earth™" witched featured mostly family members of BIG FEDI™" and brought back to the Lake thier cousin (co-CEO/Artist) Dirty D. With Dirty back in the Lake, he,Chino 4 Real & his older brother HURRIKANE decided to make the group "BIG FEDI HARDHITTERS™". The BIG FEDI HARDHITTERS™ where to start thier first project but do to unfortunate circumstances Chino 4 Reals brother HURRIKANE is in prison but is schedualed to be released in October of 2008. Thats when he says, "They will be working on the album"
"This Is My Year™" the 2nd album produced by BIG FEDI™ was Salt Lakes Battle Rap King Kaotic.