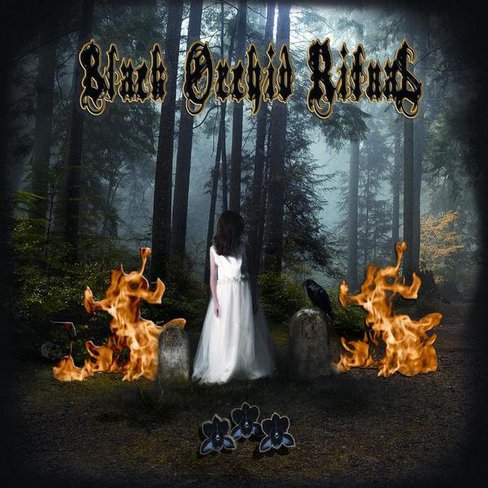 Raven Elias who grew up in the haunting streets and barrios of East End Houston, with long time friend Robert formed the band in 2007 and found Bass player Sergey in 2010, as the power trio they had been looking for. Influences: There are many.from the classics to the new bands today.basically something guitar oriented.We love classic Horror flicks,so a little goth is evident in the songwriting, we like to call it subtle macabre music,but we're pretty universal about song themes and Images. There is alot of original talent here.Innovation.old school and Heavy modern new music perfectly mixed with a sometimes retro sound. Rock,grunge,heavy metal,hard rock,epic sounds, spewing drop D guitar tunings,5 string subsonic low bass guitar,orchestrated strings,sitar to harpischord,retro-70's to modern synths,you name it we'll record it in our Songs.

It's been said and noticed that BLACK ORCHID RITUAL has a unique style of writing, and stands out among the thousands from their genre of music,a very original voice and an innovative approach. And so with a debut CD that is selling and is now in distribution by CD BABY;ITUNES,TUNECORE will be next.The band is on advertising tools like JANGO.COM, and many other internet tools .

BLACK ORCHID RITUAL songs are circulateing World Wide. It was noted that BLACK ORCHID RITUAL in first ignition 2 years ago in just a two week period had begun to gather an internet fan base of last count, two hundred and nineteen and counting thru out the States, including over seas;eager fans who are waiting to buy their CD's and all things BLACK ORCHID RITUAL. Also a 2nd Official CD release is due in May  2012, an album filled with a diverse massive wall of sounds,including drop C-tuned shredding guitars, panic fast double kicking,monsterous bass riffs and the ever ghostly melodic vocals of Raven, hinting on religious and political lyrical subject matter.Diverse sounds as cellos and violins,Harpsichords and 70's retro analog Keyboards, Modulations, FX's and dramatic sound tracks. Conjureing up a few haunting spirits,this new release will have a modern Heavy Rock radio format and a genre of its own.