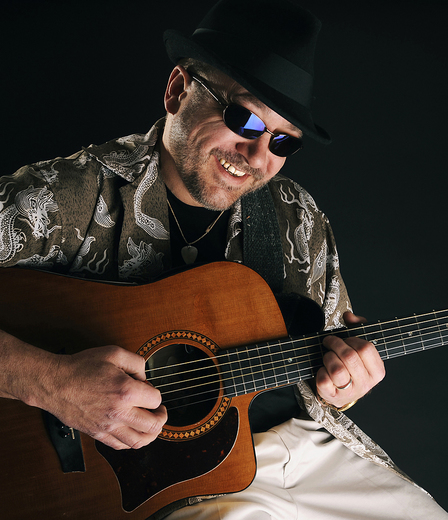 Brad Hooper is a Maine singer/songwriter living in the unorganized-territory of Albany Township, Maine. He lives, plays and writes on a small farm nestled in the foothills of Western Maine. He has been singing, playing and writing for more than three decades.

In 2009, Hooper took his talent “off the farm and onto the stage.” (He finally learned how to play the guitar last Tuesday at 4 p.m.) Since that time, he has seen a consistently growing fan base, expanded show schedule and gained the respect of his contemporary peers.

With a nomination for the Portland Phoenix Best Music Poll 2013 (Blues), a 2013 debut show in Chicago, a three-show series of concerts in Cambridge, MA, and a second upcoming show on WMPG live, Hooper is constantly gaining attention with his talent. Originally from Chicago, Hooper moved to Maine, the land of his bloodlines, in 1980. No longer sure why he wanted it in the first place, Hooper racked up some serious “mileage” while growing up (questionable) and raising a family.

Hooper has grown into a voice all his own. He writes and performs songs that are raw and intuitive; lyrics fueled by years of hard-mileage and universal-truths. Hooper’s voice is like the gravel chiseled from the stone of his creations and the finely-polished surface of his finished musical sculptures. “Smooth like whiskey, sweet like an old guitar. Really?” quips Hooper. “My voice is a God-given gift. I had little-to-nothing to do with it. I like to sing and people seem to like it when I do.”

Chris Busby, editor of the Bollard in Portland, Maine, had this to say about Hooper’s debut CD, “Midnight at the Hilltop Hotel”: “This guy’s the real deal. No flash, no gimmicks, just solid guitar playing and soulful vocals,”  — Chris Busby, The Bollard, July 2009
(http://thebollard.com/2009/07/15/brad-hooper/)

Quite often Hooper will quietly take the stage and then proceed to spin a song like it was the last thing he was going to do. His vocal quality often has him pegged as a “blues man,” but his content spans many genres making it difficult to pigeonhole the guy. Americana, roots, blues, folk, you’ll have to decide for yourself.