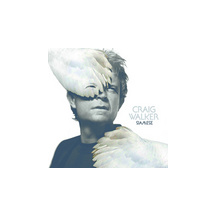 Craig Walker first made his mark in the late eighties with his Dublin-based band
Power of Dreams. In 1989, while Craig was still in his teens, POD released their
critically acclaimed EP, A Little Piece of God. The following year they were signed to
Polydor and released their debut album, Immigrants, Emigrants and Me, a record that
was ‘remarkably mature work for ones so young, especially the songwriter, Walker.’
NME hailed Craig as ‘the most exciting songwriter I’ve heard this year.’ The band
embarked on a global tour of more than 30 countries including Japan and North America.
In 1992 Craig and the band moved to London and released 2 Hell With Common Sense.
In the following two years they released Positivity and finally Become Yourself, which
suitably titled, marked a further evolution in the bands sound and ‘delicately completed a
set of recordings which are a rare and lyrical insight into the life journey of adolescence
to parenthood’.
Wasting no time in moving forward, Craig formed the band Pharmacy and
released the single Shine.
In 2000 Craig joined the progressive electronica band, Archive and released four
albums on East-West France to growing popularity and critical acclaim. In 2001 the
benchmark single Again was released on the album You All Look the Same to Me and
broke the band in new territories throughout Europe. Extensive touring followed until
2002 when Archive composed and recorded the entire soundtrack to the Luc Besson
production, Michele Vaillant. Considered by many to be Archive’s masterpiece, Noise
was released in 2003 to glowing reviews and further expanded the bands popularity.
Craig’s involvement with Archive was complete with the 2004 release of Unplugged.
Expanding his range of artistic achievement, Craig moved on to work with
various composers including Nathaniel Mechaly, Michael Nyman and Nicolas Errera.
He has played with an eclectic assortment of talent including The Athens band Transistor,
the French house producer Demon, Nick Muire of Bedrock, Juini Booth of The Sun Ra
Arkestra, Grand Popo Football Club, and The Fitzcarraldo Sessions.
Siamese is Craig’s newly completed debut solo album, which was produced by
and co-written with Bardi Johansson in Reykjavik, Iceland. The collaboration of these
two artists has resulted in a beautifully crafted collection of songs with careful
arrangements and lyrics of keen observation and timely appeal. The album strikes a
delicate balance of dark natured, hard hitting songs such as Greedy Pig, and contrasting
anthems of optimism and hope such as Sunshine. The song Bright Lights is featured in
La Fille du Rer, Andre Techine’s latest film, and will be the public’s first opportunity to
hear Craig’s new work.
Now, the year marking the twentieth anniversary of his first release, Craig is
living back in Dublin. He is in touch with his roots, with his heart in the present and his
sights set for the future.