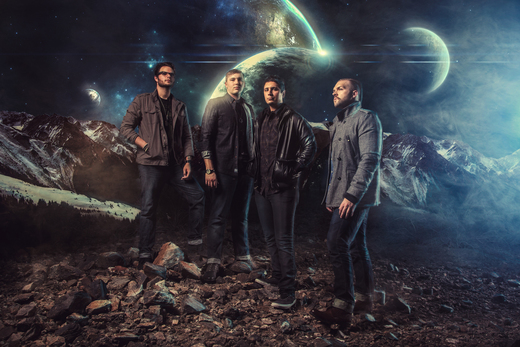 From the second you hit play, to the moment you put your IPod away, Crash Coordinates hits you with memorable melodies, air guitar worthy riffs, and heartfelt lyrics. Their music can be described as an intelligent blend of Pop and Rock. The name derives from their intentions of sharing their music with the world. Hence, “Crash” signifies blasting their music to different places, and “Coordinates” denotes their listeners.
Hailing from Tempe, Arizona, old-time friends Chris Kalla (singer/guitarist) and Chris Wahl (guitarist) decided to create a career out of their passion for music. When both members came together, they knew they needed talented musicians to finalize their sonic group. That’s when members Jon Stoddard (drummer) and Kevin Williams (bass) were added to the lineup.
The band members have endured finishing college while playing music full time, putting in significant time in practicing and promoting, touring different cities, and establishing their name in the scene. They have played with such established artists such as Saosin, A Rocket to the Moon, Anarbor, The Summer Set, The Downtown Fiction, Never Shout Never and This Century.
Crash Coordinates is currently touring extensively around the United Sates to promote their newest collection of singles. “We feel confident about the new songs,” says vocalist Chris Kalla. “We came into the studio with a lot of different material and we tweaked and refined it with each different producer to come out with a final product that the whole band was extremely proud of.” Crash Coordinates will be releasing a string of singles in the coming months. It's only the beginning for Crash Coordinates.