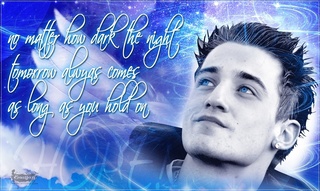 FOR THOSE WHO WANNA KNOW: March 20. 1990 - 9 o'clock In a gray hospital, in a gray city of a gray land,
I saw for the first time the yet so beautiful gray of this world.
I was my mother's third child. now that I couldn't color my life or my
childhood with my crayons (which mostly did not color anyhow),
it probably had to remain first with the gray.

At three, I learned to walk and at four to piss standing up.
I entered kindergarten and was kicked out of class at four and a half.
By the time I was five, my mother lay on her deathbed with stomach cancer,
from which she has since recovered (thank God).
My good for nothing, lazy ass, alcoholic, women beating father who had taught me nothing in this life,
except how to dry your back with a towel, left me and set my brother and I up with his
so-called friends, which nobody knew and whose cooking was worse than Peggy Bundy.
He never appeared again. After one month, my mother was dismissed from the hospital.
I found myself pretty emaciated, and like my Mom said extremely stinking,
and sank back into her arms.

My childhood was spent between here, there, (Odenwald / Germany), nowhere and
in one of the seven-Kastellas (my seven ghettos of sunshine) at the south coast of Dalmatia, Croatia,
where I unwillingly moved by the time I was thirteen due to family reasons.
This was also the place where I first put my rhymes to paper, initially because of loneliness and a
lot of pain. but In time, I found pleasure in writing rhymes and discovered the possibilities in them.

As the year passed, I mastered the Croatian language, while my desire for finding like-minded
homies led me to the streets and everything happening there.
I quickly made friends, but unfortunately I was also drawn to negative things like drugs, hatred, and violence.
I was young and stupid and lost myself. I began to shit on everything, dropped out of school,
started to sell drugs, and turned to hustling until the cops started to shadow me which didn't
really prevent me practicing the 'art of building shit'.

Finally There were two great loves that opened my eyes and saved my life before I was able to make my exams.
The first was my love for hip-hop and art and the second was my love for the girl of my dreams.
I began to write and rap and was looking for like-minded people, which was not so easy, since not
everybody who sells dope and does some gangsta shit wears baggy pants and pumps the new Jay Z, Nas
Rule, or 2-Pac shit, if you know what I mean. Actually I found only one man down there who really shared my
interests and that was my homie NOIZ. Together we created the DSC (Dalmatian-South Coast hip-hop
community), but it never really grew. Since there was very little support from the outside, we had
to continue to write lyrics and record our shit on old, cheap cassette recorders.

Outside the daily 'rama drama' at home, everything was pretty cool now.
I dreamed of studio recordings and phat jams, but I was aware of the
reality and knew that would never happen, at least not where I was.

Fate finally brought me back to "Grauland". Four years after my arrival in Croatia,
I was back in Germany again and found myself in Seckmauern, a small town next to Haingrund
again and everything went pretty fast now.

After three months, I've finally got my ass moving and visited them two months later,
recording the first tracks on disc. the group "Monologue" was born and the story continued on its course.