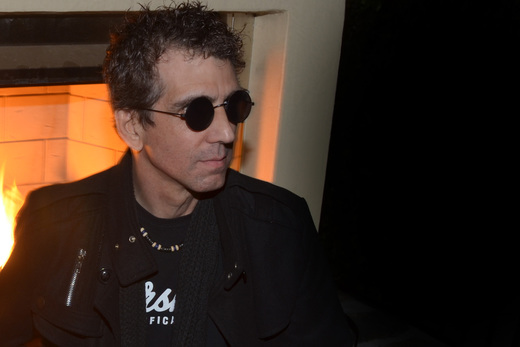 Born and raised in Los Angeles, CA., I began playing drums at age five, and developed a passion for artists as diverse as Jimi Hendrix, Joni Mitchell, Emerson, Lake, and Palmer and Alice Cooper. I also studied guitar for two years with the late great Randy Rhoads. My focus gave equal attention to composing and drumming, working with a string of noted bands, including L.A. metal giants Divine Rite, the techno-funk of Social Fact, August Kurly (with whom I first played with T. Gunn) and my own metal band Mach One in the 1980's. I also plays guitar, bass, and keyboards and have my own full production recording studio at my home in Toluca Lake, CA

What do you get when you undertake a project using four virtuoso musicians from four different styles of play; Jazz, Blues, Fusion and Metal? You get Big Franklin

Brought together by the diverse songs of Donny Sarian (music) and Michael Albarian (Lyrics), Big Franklin brashly asserts that the song's the thing, now and forever. "this is not be the flavor of the month, asserts drummer Sarian, "and we don't follow trends." We all need a Rock outlet at times and this project is the perfect way to do that and have fun at the same time. Sarian's sentiments are shared by the other members of Big Franklin, as well as by Albarian, who not only wrote most of the lyrics, but also produces BUY THE TICKET, TAKE THE RIDE. Adds guitarist Frank Gambale, "I like variety. As long as a song is good, it doesn't matter, and there's a lot of damn good songs on this album.

Great songs fueled by great players is what you get with Big Franklin. And speaking of world-class musicianship, the Hammond B3 organ you hear on the CD is played by none other than the legendary Brian Auger. Clearly, in making this debut album, Big Franklin has pulled out all the stops

Upbeat pop gems like "Can't Have You" dovetail with acoustic-flavored songs like "Don't Close Your Eyes" or the anguished "Softly In The night." Other songs like "Maxine," the buoyant boogie rocker "Buy The Ticket, Take The Ride," and the bluesy "Mama Said" (with lyrics written by lead singer T. Gunn) deliver in-your-face power rock. Others, like the wistful "Change Of Season" and the edgy bounce of "Take Me To The Fire," punctuated by Robby Pagliari's fretless bass groove, tells the story of irresistible, self destructive addiction. "Just Another Saturday Night" is a chilling recount of the night before, sung as a duet between T. Gunn and Melora Hardin, while "All the Way Back Home" shows what the band can do with a country-flavored rocker. The album ends with a new classic live version of "For What It's Worth.

Drummer, Donny Sarian grew up in Los Angeles along with childhood buddy Michael Albarian. He began playing drums at age five, and developed a passion for artists as diverse as Jimi Hendrix, Joni Mitchell and Emerson, Lake, and Palmer. He also studied guitar with the late great Randy Rhoads. Sarian paid equal attention to composing and drumming, working with a string of noted bands, including L.A. metal faves Divine Rite, the techno-funk of Social Fact, August Kurly (with whom he first played with T. Gunn) and his own Metal band Mach One. Composing and pre-production was a snap for Donny since he also plays guitar, bass, and keyboards

T. Gunn, also an L.A. native, similarly held a life-long love of music and singing. He was influenced by a wide group of artists, from James Taylor to Black Sabbath. T. sang lead with VVSI, one of the most notorious L.A. headbanger bands. His abiding passion for the blues led him to launch his own blues band, Smokin' T, which performed constantly at southland blues venues. He was also the front man for Laidlaw, a group signed to Nikki Sixx's Americoma label

Although he played everything from stand-up to Fender, Robby Pagliali's specialty is the six-string fretless bass. He developed and honed his unique style as part of the influential Jazz-Rock fusion band The New Yorkers, as well as the metal band Divine Rite. Pagliari, is also currently with Chris Poland (Megadeth) and Kofi Baker (son of Ginger Baker) in OHM:, a monster Fusion band

When Frank Gambale was asked to join, the peoject really began to click. A native of Australia, Frank began playing guitar at age 7. At 23, he relocated to Los Angeles to seek a career as a jazz guitarist. He taught at the famed Guitar Institute of Technology in Hollywood. Gambale has released 14 solo albums, and toured with Jean-Luc Ponty and, currently is also with Chick Corea. With Chick Corea's Electric Band, Frank has earned a Grammy award. More recently, Frank has designed guitars for Yamaha and chaired the guitar department at the L.A. Music Academy. Other artists he has accompanied include Tom Coster, Eric Marienthal, and Steve Smith's Vital Information. Gambale has always been a closet rocker, which is one reason why he was so drawn to Big Franklin. "Back in Australia, I was always in the rock world," he notes. "I thought these songs had great ingredients, and I wanted to help as much as I could.