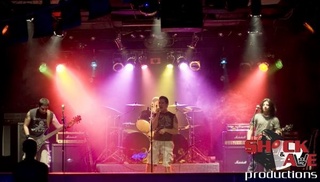 Reflection: An instance of reflecting. An effect produced by an influence. A thought, idea, or opinion formed or a remark made as a result of meditation.

Endless Reflection is a culmination of four individuals converging together to create a new way of thinking. It compels its listeners to question the truth and open their minds to other possibilities. Also, to think freely amongst the conformity of the masses and a generic way of life.

Formed in the spring of 2007 in Kennesaw, Georgia. Endless Reflection began as a way of creating a new musical sound and concept. Guitarist Diamond Z. reunited with vocalist Brad Bishop and new member, bassist Tone. After a few line-up changes, they found a drummer, Ian McDuffie, to complete their sound. Months of writing and re-writing began to shape the defiant and individualistic music that is a breath of fresh air from the monotonous and mundane pop culture that we live in.

In March of 2008, Endless Reflection entered Funkhouser Studios to record and co-produce their first EP Mirrors to the Masses. Producer and From Tomorrows bassist, Miles Landrum, helped them capture the message and emotion the band intended in their music. "This is one of the best projects that I have had the pleasure to be a part of", producer Miles acknowledges. After three weeks of recording and mixing, the final cut of the debut EP Mirrors to the Masses was released on April 28th, 2008. Hard hitting drums and thick punchy bass mixed with aggressive yet melodic guitars, set the stage for the perfect blend of energy and harmony that flows through the vocals.

The opening track, "Screams of Revolution" is fast-paced with high intensity that draws the listener to dwell with the energy from within the music. With fret-ripping solos and a driving beat, the smooth mix of clean powerful vocals and emotionally charged screams lend to the overall strength of the track. "Writing this song was a challenge, both personally and musically. The accomplishments made not only benefited me, but the band as well", guitarist Diamond Z. explains

"Watch Over Me" explodes with raw energy and aggression. The slower pace lends itself perfectly to the heavy, overdriven guitars. Blasting cymbals and drums help accent the thought-provoking emotion in the lyrics. The song builds to a beautiful crescendo of strings and operatic vocals, which creates the perfect blend for a theatrical, yet raw finish. Tone adds, "It's like a heavy waltz that challenges my way of life and thinking in a beautiful serenade".

"The best thing about songs like ‘Clay Soldier’, is that they are open to so many different ways of interpretation that forces you to think for yourself and become who you truly are", Ian says. Controversial and attention-grabbing lyrics mark a new way for people to see why conforming to the norm will lead to our downfall. The prominent and solid bass lines, melodic guitars, and fluid drums add a sullen yet invigorating touch to complete the track.

The conclusive track of the EP, "Wake Me in Still Waters (My Refuge)", shows the ability of the band to be open to different genres and succeed at doing it. Listeners will embrace the heart-felt emotion created through powerful vocals and full, rich acoustic guitars. Brad states, "I feel the purpose of this song is to bring us back to our human roots, and to allow people to feel an intimate exchange of emotions".

Endless Reflection will be promoting their EP starting this summer (2008) with a list of shows to be posted as scheduled.

So what's in the name Endless Reflection? The never ending reflection of self, life, and passion through music.