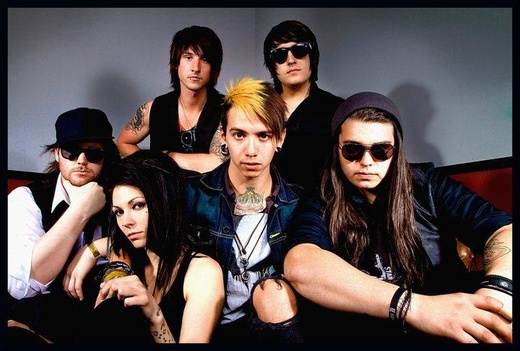 Eyes Like Diamonds, not just a pretty face. Quickly taking Vegas by storm and playing their 3rd show ever with Escape the Fate and LoveHateHero at the legendary Troubadour. Shortly after ELD shares the stage with nothing but the best national bands from their genre!

After some vocalist problems, ELD picked up their new permanent vocalist Diego Perez. With him came a massive following of fans from the Pop-Punk scene. Noticing their new fan base, ELD decided to compete in the first Battle of the Fans. They were not disappointed; ELD won a spot on the arguably biggest show to come through Las Vegas every year, Extreme Thing. Destroying the stage yet again; with Escape the Fate, along with Pennywise, Chiodos and quite a few other national acts.

After winning the highly coveted Extreme Thing slot, ELD felt something was missing. Having added a few synth/key parts to their songs, they had no one to play them live! They found a perfect match with Danielle Schrudder.

Fast forward exactly a year later, ELD has won another slot on Extreme Thing 09! This year they will play with Bad Religion, Silverstein, The Vandals, Framing Hanley and a few other national acts. With no end in sight to their obvious take-over of Las Vegas, ELD is gearing up for some serious touring! Completely dedicated to their music, they released their album Mystery in October of 08. With everything from skull crushing breakdowns to a beautiful piano intermission to poppy hooks. It’s no wonder why they’ve kept their fans coming back for more!

This is Eyes Like Diamonds, and this is only the beginning.