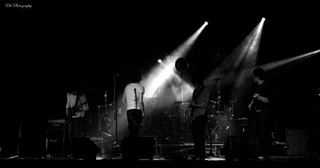 Formed two weeks before their first gig at the Maryport Blues Festival 2007, Feed Me are a fresh and dynamic new blues band, showing people that modern music doesn’t have to be what’s in the charts. Performing a repertoire of their own original material, and reworked old blues songs, Feed Me are on a mission to bring blues into the modern era.

The band consists of dual guitarists Kiefer and Jamie, who have been playing together since the age of nine and writing their own music since fourteen. Phil Lowery drives the band with his muscular bass lines. Andrew Bates on drums is a seasoned professional and having been on several UK tours has developed into a fantastic drummer. In early 2008 they found a lead singer, Jay, to complete the line up. Jay has been singing for as long as he can remember, has a national diploma in performing arts, and has been involved with many different amateur operatic societies.

The band has been gigging fairly constantly since the summer of 07, and has always given 100% commitment to each performance. Their live shows are full of energy and by the end of the night everyone will be on the dance floor. Currently, Feed Me are writing and recording their debut album of original material, which should be released in 2009. In the future, they hope to reach an even wider audience and spread their sound like warm marmalade on soft toast.

To contact the band about bookings or any other queries use: feedmeuk@gmail.com

Hey we would just like to point out all feed me material is copy right and it is an offence to own any original tracks without consent.