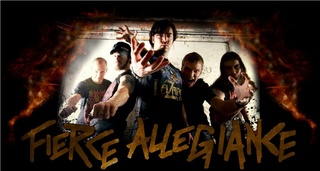 After spending the past few years touring and several independent
releases, Washington DC’s Fierce Allegiance is back with their new EP “A Season in Hell” that pushes the boundaries of metal – melding death metal, thrash, and classic metal into a sound that can only be described as heavy, fast, and loud. Inspired by a Carcass meets Testament sound, their new album features more shred and shear insanity at mach speeds.

NEW EP – MIXED AND MASTERED BY ZEUSS
During late summer 2010, the band entered Planet-Z studio to complete recording, mixing, and mastering with Chris “Zeuss” Harris (known for production/mixing of WhiteChapel, Shadows Fall, The Acacia Strain, Chimaira, Bleeding Through). The songs from “Season in Hell” are anthems to destroy your enemies and thrash the pit; from the rapid fire of “Devil’s Knight” the shear brutality of “Invocation/Dust to Dust” to the circle pit frenzy of “Live Free or Die.” This EP offers only a taste of what is to come – as the band is gearing up to bring their metal assault to a city near you.

U.S. TOURING
During 2008 and 2009, Fierce Allegiance toured across the USA,
including several tours supporting Vital Remains (Century Media),
Skinless (Relapse), What Lies Beneath the Tide, Infernaeon
(Prosthetic) and main stage performances at the Central Illinois Metal Fest and Kentucky Mayhem in May Fest.

On the east coast, the band has also shared the stage with every band imaginable adding to their legion of metal fans, opening for Dark Tranquillity, Suicide Silence, August Burns Red, Darkest Hour and more.

Fierce Allegiance is attacking the internet by firestorm. The band has topped the PureVolume Metal charts with over 48,000 streams, MySpace Metal, and Metal Injection unsigned video charts. The band has been spotlighted in Bravewords and Bloody Knuckles, MTV2, Metal Maniacs, and Metal Underground.

Fierce Allegiance has been featured on several extreme sports
soundtracks including Adrenaline Crew Part 3: The Road Behind and Mischief Part 7, released through Warner Bros/Rhino.

Look for the Fierce Allegiance live assault to hit your town in the
near the future! You have been warned.