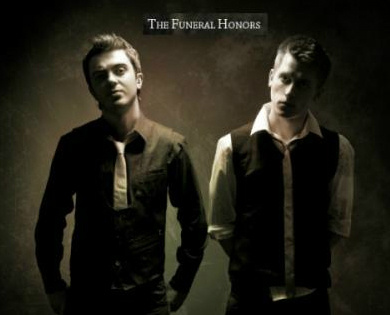 About the Funeral Honors

Formed in 2008. Damon Walker and Michael Rubin decided to make their band famous worldwide. After recording a couple of songs, and making a few live shows, they decided to upload their tracks to a crowdfundind site SliceThePie.com
After nearly 9 months of rallying and promoting, the duo from Moscow have now reached their financing target of $10,000, and can finally start putting into place plans to record a brand new EP

Originating from California, The Funeral Honors story is an intriguing one, and one which has seen them travel many, many miles all the way to Moscow with the objective of taking their career to the next level. 6 months later their artistic identify and debut album "Bad Dreams Still Mine", were born

The Funeral Honors' synth rock sound is something unique, and showcases obvious influences coming from Depeche Mode and HIM, bands that have gone onto receive great amounts of commercial success through the combination of rock and electro

Over the last 2 years The Funeral Honors have been earning their stripes on Russian the live scene, which has seen them support a number of established Russian Acts

The Band are now looking to use the funds raised on Slicethepie in order to record a brand new EP and build on the where B.D.S.M. left off