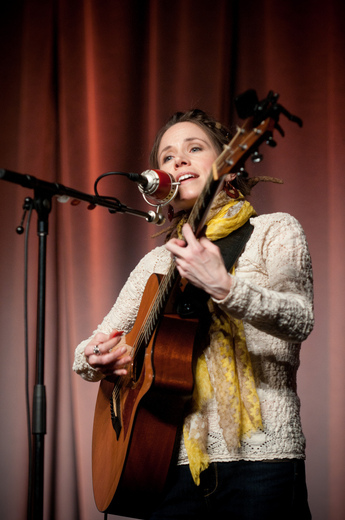 In the midst of the worst recession since the 1930s, Heatherlyn gave up her day job in Burnsville [MN] to pursue music full time. After two years and thousands of miles on the road, the singer has a new album and a new mantra: authentic, available, audacious.

This story picks up in the beginning of 2009, when 240,000 people were out of work in Minnesota, the highest unemployment recorded since the state began keeping records in 1976. In the darkest days of the recession, Heatherlyn made what would seem to many an unthinkably perilous choice: She quit her job to pursue music full time. “I couldn’t shake this dream,” said Heatherlyn, who prefers to go by her first name alone for simplicity’s sake. “It was a huge risk.”

Heatherlyn’s journey began a long time ago, when she was just a child in Maine.

“My mother says that I was singing before I was talking. I don’t know if that’s true but I sang in front of people in churches as a little girl,” Heatherlyn said. “I’ve been singing my whole life really.”

During college, she taught herself to play guitar. Before long, she started writing original compositions.

By the late 2000s, Heatherlyn’s passion for music became an undeniable call. The budding singer-songwriter left behind her position at Prince of Peace Lutheran Church, where she was charged with youth music and art, and hit the road with her husband Jason, who manages sound and lighting for Heatherlyn. The two took gigs wherever they could be found.

The first few months were difficult.

“Our little savings dried up quickly. The first time we set out on the road beyond our region was the toughest time,” Heatherlyn said. “We had a couple things lined up, but nothing even guaranteeing the cost of our gas, let alone our bills that month. I probably cried from Minneapolis to Denver and from Denver to Phoenix.”

To make matters worse, Heatherlyn contracted a sinus infection on the way, an illness not covered by the private health insurance she and her husband bought. Their first trip to the southwest was off to a bleak start, but in the end the two persevered.

“It ended up working out. People did end up seeing the value (of our work) along the way and there were some unexpected supplements to the minimal compensation that we were provided,” Heatherlyn recalled. “I think we broke even, which is brilliant, which is what we needed to do.”

“For about two years I didn’t buy any new clothes. It takes a lot of determination and willingness to sacrifice other things but it’s worth it to us,” Heatherlyn said.

The couple’s hard work is starting to pay off. Just a week ago, Heatherlyn released her second album —”Storydwelling”— a soul-roots-rock record that has gotten attention from national publications. Heatherlyn’s devoted fan base paid for 70 percent of the production costs, she said.

“We couldn’t do it without the community of people who believe in us and encourage us,” Heatherlyn said.

To Heatherlyn, it feels as if they are entering a new season, perhaps beyond the steep, rough path and into the beautiful fields beyond. At present, the

Heatherlyn team is working on a new music video and touring dates. She has also been named a finalist in the Midwest Region “People’s Choice” in the NPR Mountain Stage and NewSong Performance Contest.

“(The uncertainty) was harder a year ago than it is now. I think part of it is that I believe so much in the dream,” Heatherlyn said. “This is where I feel the most alive. I really, truly believe that this is the best thing I have to offer the world.”

Heatherlyn is a singer song artist with a Soul – Roots – Rock vibe from Minneapolis MN, selected as a Midwest Regional Finalist and awarded the Midwest “People’s Choice” (2010) of NPR’s Mountain Stage Performance Contest. Her soulful, honest voice resonates with people from many various walks of life. In concert, Heatherlyn leads participants on a refreshing journey of connection – from whimsical laughter together to deeper thoughtfulness about life and love, considering how we each are conduits of peace and hope in our world.