Here Lies Yonder is a band o
Six brother
Playing out of Yonder Texas
A fictional town, where they have bee
Heavily influenced by roaming bands o
Nomadic musicians.

Their music has been described a
Gypsy-Blues-Rock an
The band has taken a liking to this description.

I remember being laid up in a hotel with an injured back while i was on the road working with my brother building shooting ranges for the military and police.I remember being frustrated with where i was and what i was doing i thought to my self"Im done,im only here on this earth for so long,why spend my existence running around chasing the money,why not just do what i love" then i thought "what is it i love?...well ill just play my guitar and think about it" and then it hit me....ive always had my guitar with me and loved to play it,it was an expression tool for me.so i made a definite decision to pursue music and write an idea i had about a graphic novel(but thats a different story) and since that conscious choice its been nothing short of magical
I return home and find that my brothers Luke and Lydon were playing guitar,i convinced my brother Dustin to learn the drums and he took off ,my brother Rex was learning violin and cello and worked at a violin shop repairing them,my other brother Tanner does nothing but sing all the time,i thought the Universe was saying "lets go" so by some crazy fate we became a band of Brothers
and it seemed fitting because we have shared many adventures together. growing up we were our best friends,brothers to the end
like Gypsy Pirates we haved moved from state to state,we were even classmates as we were schooled by our rebel hippie mother
we even work together for my fathers construction company
And now it seemed we were to sail the seas of the music industry
METHODOLOGY
That first night i remember we crammed into Tanner and Lukes bedroom, Lydon and Luke had a few songs they were working on and started to strum,Dustin busted out some rough but steady beats and i was at the mic and had never sung before.I let loose a bit and all of the sudden a melody came into my head and then a few words and i belted them out "oh darling darling why do you play with me this way" it was Magic...anyone else besides us probrably thought someone was being tortured up in that room but to us...Magic....Darlin Darlin is our first ever finished Recording we didn't really know what we were doing,,and still don't
Dark Days is a Recording of that methodology ,its pure freestyle,the lyrics were sang as they popped in my head along with the melody.and thats the way we have done things
THE REASON BEHIND THE NAME
while this new course was set in our lives and we were making way to set sail,we were opened up and made awake to allot of things going on globally and personally,a shift or change in the way we thought IT was....we were seeing the madness of the human race and all its blunders and we were seeing the madness in ourselves also...I think we share the same attribute as most humans in that we are seekers....we spend most of our lives seeking...seeking purpose...seeking truth....seeking love....success...meaning,,ect.ect
nothing wrong with that but we have found the ultimate jewel that has put an end to the seeking....and that jewel was "HERE" all along what we were seeking for wasn't to be found "YONDER".it "LIES" within. what you seek you already are
thus the name HERE LIES YONDER
so you might find as we release more songs that they are an expression of what we are going through and finding we have songs about the madness of war(Mushroom Cloud) ,the sadness and pain of human emotion(Hold Me)the wanting to free yourself from the old way of thinking(free mind,Inside Me)realizing you are in a crucial time for the planet and humanity and deciding to rise to the ocasion(Dark Days).we have some coming out that are seen through the eyes of sarcasm( Strange Town) song about the system that we live in coming soon(Blackout) but then we have songs that express a more peaceful energy...we just haven't gotten to them yet...lol...so we hope you will join us on this voyage.we welcome the company.... 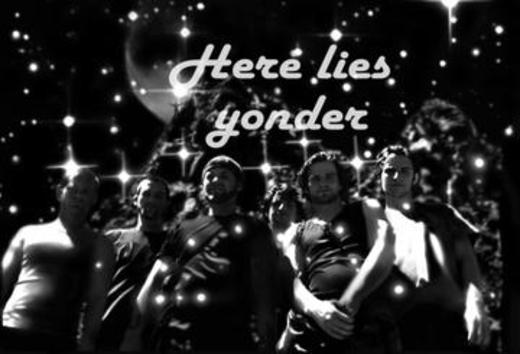