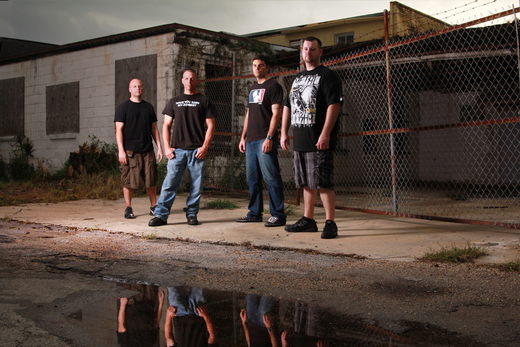 About Heroes Will Fall

Central Florida's Heroes Will Fall has been melting faces with their tight live show since mid-2008 with their exciting blend of hard rock that flies seamlessly between metal, hardcore, and tasteful pockets of melody.
2010 saw the release of their debut CD "The Red Chapter" which has been given rave reviews. Danie Boyer of All Access Music Magazine writes,
"…all too often bands just mass produce the same song over and over again. To remain on my MP3 player a band has to have that exact creative longevity. Last month I added 'The Red Chapter' by Heroes Will Fall to my music arsenal… Admittedly the more I listen to it the more I appreciate it, realizing that 'The Red Chapter' will stay on my favorite list for years to come.

In March 2012, Heroes Will Fall released the follow-up to their debut album. Their five song EP "Defying the Parable" shows a tighter and more polished sound giving fans a taste of what to expect from the future of Heroes Will Fall.

Heroes Will Fall is: