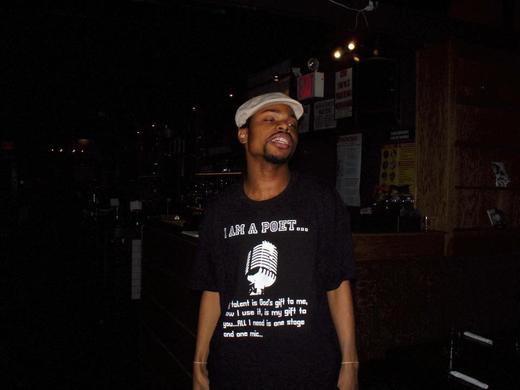 They said "this boy is shy...this boy too quiet...this boy need open up and project more....he don't talk enough..." Well, this "boy" is a man now. And has grown to be the truth and speak it to the masses. The truth has always spoken...people jus wasn't listening...until now. Growing up in one of Brooklyn,NY's most well known sections for violence and crime in Crown Heights, to Grenadian,W.I. parents...Even his teachers, as far back as the 4th grade admired his articulative way with words. This "shy boy" has always had eye for realness and a mind of insight, productivity, intuitiveness and prosperity. And also what most rarely saw or noticed, a mouth full of reckless honesty.

"I admit, being the youngest of six brothers it wasn't easy for me to open up to any and every new person I met. Anyone who didn't know me well or did, probably never saw this coming for and out of me...given my private demeanor as a child. Through the ongoing years, up to today...I think I've mostly evolved out of that "shyness cocoon" everyone seemed to label me with. Though the high school years were a stressfull and trying time for me in more ways than one;(personal issues with suicide and suicidal tendancies,around the age of 13 was one.) my first release of tension with this yet untamed mouth piece wasn't with poetry, but music. And have written a little around a dozen songs, even had a little group with my brothers called "B4".(back around 1998) That was way before the group "B5" came along. But LIFE happened, and the group dispanded before having a chance to even putting something out to pursue that dream. It change to poetry when writing music didn't feel like enough and I left that on hiatus."

Some of his idols and base inspirations growing up, in poetry, were Langston Hughes, Robert Frost, James Balwin. This list continued and continues to get bigger every day now. From Edgar A. Guest to Gil-scot Heron and Taalam Acey, Ainsley Burrows. With parents who were always encouraging and knew how special he was,told him to keep God in his life and he would be blessed. Because you reep what you sew.

Poetry then took center stage around the end of high school. His mind was far from set at that point and it went on hiatus too. Until his 1st yr. in college in 2007. When he was reinspired to write again by joining a creative writing/poetry club and started even performing and featuring at school events. Which also lead to venues around manhattans lower East side...which he performed in such places as Bowery Poetry Club...which was the first open mic poetry venue he had ever been in; Nuyorican Poets Cafe; (Where he took on the nick name of Honest Abe, though he thinks the name goes even as far back as elementry school) and even at New World Stages in the Time Out NY Lounge. Even as recently at 449 LA, Billie's Black, La Pregunta and Mocha in Harlem,NY. Also being a featured artist at the Time Square Arts Center(June 2008) and recently,at Urbintel's:VERSES at the Nuyorican.(Feb.2010) "Some still consider the name a cliche monikr, but they know better once hearing one of my poems...schooling them about it. I really started using my voice and experiences and bringing them to life back on stage(another place I was on hiatus from being for some time)." Starting to participate in more and more slams(Bowery NYC College slam,Nuyorican poetry slam...etc) after observing and hearing other poetic artist doing there thing. While honing his own style in the process. He is still a current student at Kingsborough Community college(for the time being, studying in Liberal arts) in Brooklyn,NY.(currently residing in Crown Heights) But he has been and will always be a student of life. A brother with with keen insight visually and mentally to see and point out things most still ignore or can't see. A conscious poetic artist who's one of his main goals is not to write to incite crimes, but to incite minds with the truth; in a world and a society full of lies and deception. Hell, call him Mr. Controversial Conscious, because he is not afraid to tell it like it is. "I'm not sure of how far I plan to go with this great performance art I've been blessed to possess. I guess only time will tell."
So...."Let my words be the inspiring shit clog, stuck in your memory's history that will never be removed. Profound like lyrics to a rap song Huey Newton wrote, that's hard to prove to you. Cause this is the untitled misery of a POET!!!" -Honest Abe